0.00
EUR/USD
GBP/USD
USD/JPY
USD/CHF
AUD/USD
BRENT
Gold
Bitcoin
Risk Warning: Your capital is at risk. Statistically, only 11-25% of traders gain profit when trading Forex and CFDs. The remaining 74-89% of customers lose their investment. Invest in capital that is willing to expose such risks.
TopBrokers.com > Forex Basics > 5 secrets of Divergence in Forex

5 secrets of Divergence in Forex

Divergence in Forex trading is actually a very simple trading strategy when you learn how it works. For those who understand the principles of divergence, it can be a very powerful tool in your trading arsenal, but you won’t profit from it unless you know some secrets about using it.

Before we get into the secrets of divergence, let’s first look at what constitutes a divergence in Forex. A divergence occurs when there is a mismatch between information on the Forex charts online and the technical indicators. When looking for divergence, oscillating indicators are the ones most commonly used because they are supposed to match the trend of created by price action. (Find out which are the Best technical indicators and how to use them)

It really doesn’t matter which oscillating indicator you choose, as they all match price action like in the screenshot below.

You will notice that as the trend was going down, creating lower highs at each crest, so were the MACD and stochastic indicators. This is what a normal market looks like when there is no divergence. Now look at the next screenshot:

You will also notice that soon afterwards the uptrend reversed, going sharply downwards, and the indicators followed the downward trend. So as you can now tell, a divergence is spotted when there is a discrepancy between the information indicated by the indicators and the price action on the main window. It can happen in both downtrends and uptrends, the only thing to check is whether the data is matching.

What are the 5 secrets?

So, what are these ‘secrets’ anyway? Always remember these whenever you want to use divergence in your trading:

Make sure the trend is present

Here, there’s no clear market sentiment and the markets are just oscillating around the primary pivot point. If you see this, just move to another chart because the divergence strategy won’t work.

Now, here, there’s no doubt the bulls are flexing their muscle as you can see the price making higher highs every time. This is the only acceptable situation where market divergence can apply. Always draw lines on your Forex trading platforms to confirm that the lines are heading in opposite direction. If the lines are parallel, then you know there’s no divergence. The lines are only a visual aid to help you identify the trend, after you get used to using divergence, you won’t have to draw the lines to notice a divergence.

Something else to remember is to confirm whether the crests of the oscillating indicator matches that on the price on the main window. You can do this using vertical lines as I’ve done in the above screenshots. It might seem like it isn’t a big deal, but a misalignment is not favourable to a divergence.

The secret here is accuracy. Most of those who claim that divergence doesn’t work have probably forgotten about precision – finance and money is about precision. So, to recap, here are the conditions that have to be met to confirm divergence:

Confirm the divergence using other clues

Never make a trade unless you’re completely sure about the information you’re getting, and this is done by finding a second opinion. For a trader, the second opinion should be a supporting piece of data, especially candlestick patterns.

Above is a pair which has been on an uptrend for quite some time, consistently forming higher highs with every dip. On the other hand, the MACD indicator is showing the opposite, crests on the MACD have been forming lower lows every time, indicating the market is bearish. So, the problem becomes when to short the pair.

If you had shorted the pair after the first sign of divergence, say, at point A, or even if you were a little patient to wait for points B or C, the uptrend would have stopped you out. Markets do not move in a consistent upward trend, but with dips where market correction occurs. Then look at point D; you will notice a doji candlestick at the top of the crest in the main window. A doji candlestick is one of the most powerful candlestick pattern because it signals the exhaustion of the current market sentiment. (Look at Forex market sentiment indicators)

In this case, it shows that the bulls are over-extended and the market is overbought, this is where you short the pair. If you had waited, you would have caught at least a thousand pips, even 3000 pips if you were a long-term trader. So, the secret here is to wait for confirmation of the trend reversal. It’s not enough that there is a divergence because, as we have seen in the above example, a divergence can go on for days before the trend reverses. (Long-term vs. short-term trading)

Some traders tend to become anxious when they realize they’ve just missed a divergence and try to enter a trade later than the divergence required. Sometimes, they get a smaller portion of the profits, and other times they end up making a loss as the newly formed trend also changes.

The secret is therefore to remain patient and wait for the right moment when the divergence forms. If you notice a divergence only after the trend reversal has occurred, move on to another chart and accept you missed that one. Besides, there are many other currency pairs to look at, so you should not try to force a trade or fall into despair.

Trading is all about patience, just like Warren Buffet advises:

Patience as a key component of the 10 steps of successful traders since back in the early 20th century by some legends like Jesse Livermore who said: 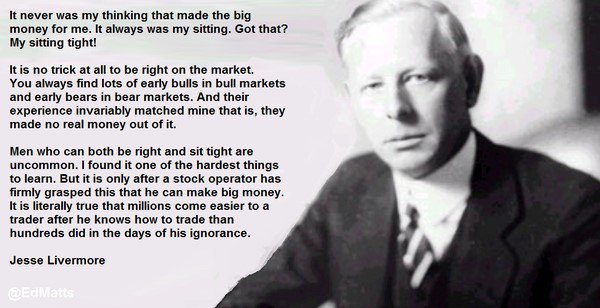 Do not feel like you have to place a trade every day or every hour, sit tight just like Livermore advises. Sometimes you can spend the entire day without placing a trade, but when you finally do the next day, it will be worth it.

Sometimes, divergence won’t pop out at you like in the examples above, it can be very subtle and hidden amidst the trend. In these cases, it can be used as a guide that the trend is still holding and not reversing. Take a look at this:

Here, there is a divergence because even though the price on the main window is forming a higher low, the stochastic indicator is showing a lower low. Normally, if the trend is about to turn, the indicator should be at the same level as the price. In the above situation, if the uptrend was about to turn into a downtrend, the oscillator should have moved higher to show the market is overbought. Instead, it moved lower, signalling that it is actually oversold, signalling a bullish sentiment. Surely, soon afterwards the uptrend continued, even stronger than before.

Furthermore, you can use these hidden divergences to determine where you are going to place your stop loss orders and when to close the trade. Suppose you had an open long position in the above scenario, without the divergence, the horizontal movement of the markets would get you worried and you would have closed your trade. Use divergence therefore to confirm where you ought to close open positions because they can be used to confirm the end of a trend.

Like all other trading strategies, you have to practice how to use them on a demo account first before applying them into your live account. Divergences are especially tricky to catch because several factors have to come into place, and the only way to master these factors is to practice. There are also various types of accounts offered by Forex trading brokers you can use to practice beyond the usual demo account, and these will give you the actual feel of live trading. (Find out more about the various types of Forex trading accounts)

If you’re still not clear on the concept of divergence, here’s a video to help:

Was the article useful for you?
4 (3)
Forex Basics
Add comment