0.00
EUR/USD
GBP/USD
USD/JPY
USD/CHF
AUD/USD
BRENT
Gold
Bitcoin
Risk Warning: Your capital is at risk. Statistically, only 11-25% of traders gain profit when trading Forex and CFDs. The remaining 74-89% of customers lose their investment. Invest in capital that is willing to expose such risks.
TopBrokers.com > Forex Basics > What is carry trade?

What is carry trade? 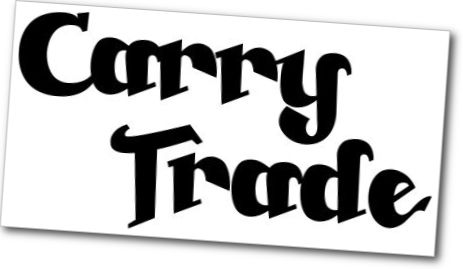 Investors are always trying to come up with new and exotic means of making money, and carry trade is one of such innovative financial instruments. Basically, it involves borrowing money from a country with low interest rates and investing this borrowed money in a country with high interest rates. The currency from which money is borrowed is known as the funding currency, and it is usually the one with a lower interest rate.

The use of carry trade transactions has been around since the 1980s and was mostly used by investment banks and hedge funds because it required a lot of capital. This was because, in order to get a loan from a foreign country, the institution offering the loan had to conduct a very thorough screening of your finances to determine whether you were credit worthy. It would involve an analysis of your income, assets and your credit rating in your home country. Even then, they may have required that you make some kind of margin deposit to facilitate the loan, but this isn’t so anymore.

As soon as Forex companies noticed the increased demand for carry trades, they made it possible for retail traders and investors to participate through the use of leverage. The boom of the carry trade started at the turn of the 21st century in the year 2000 and quickly became very popular until the global recession of 2007 and 2008 hit, causing many investors to close out their positions. Since then, investors are gradually returning to the carry trade scene and it is among the most popular financial instruments by Forex traders.

How does this work?

With this knowledge, the investor chooses to borrow money from a Japanese bank that lends at the country’s 0.00% interest rate, most likely a loan. This investor then uses the loan to buy an asset in another country with high interest rates, such as the South African rate of 7%.

Let’s assume that the investor borrows 1 million Japanese Yen, and the current exchange rate for ZAR/JPY is approximately 8.5. The 1 million in Japanese Yen can then be converted to 117,504.52 SA Rand, which can be used to purchase, say, South African bonds at an annual dividend of 7%. At the end of the year, the investment would have grown to 125,729.83 SA Rand, providing a profit of 8225.31 SA Rand.

The above is the classic carry trade structure, but nowadays, the process has been streamlined with the introduction of brokers who make the transactions on your behalf. Plus, the brokers have included leverage into the carry trade transactions, making the profits extremely lucrative. Banks offering Forex trading will also offer carry trade services to their clients, and this has the added benefit of security as opposed to online Forex brokers who might be scamming you.

What to consider before making a carry trade

In order to make money out of a carry trade, the interest rate of the funding currency has to remain lower than the alternate interest rate. In the above example, we assumed that the interest rate in Japan remained at 0.00% and that of South Africa at 7% throughout the year. Instead, if the Bank of Japan, for some reason, chose to raise their interest rate to, say, 3%, then the profit would also reduce.

It could even be worse when the interest rate of the funding currency becomes higher than the alternative currency, in which case the investor would lose money. 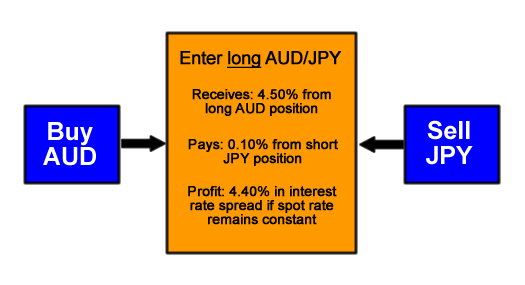 Another this to consider is the relative stability of the economies of the currencies involved in the carry trade. Japan is usually considered a very safe and reliable economy with minimal swings in interest rates, inflation, etc. However, countries like South Africa in the above example are not the best to involve in a carry trade because of relative instability. It would be better to opt for a currency with relative stability such as New Zealand or Australia, albeit their low interest rates of 1.75% and 1.50% respectively. Remember, investing is not about making quick money but more about preserving capital as we learned from Bill Lipschultz in the best Forex traders of all time post.

The decline of carry trade operations

The 21st century beginning in 2000 was the boom of the carry trade system when it became available to retail traders instead of just the major investors. That plus the introduction of leverage by brokers made the profits very lucrative and attracted even more investors. The most popular carry trade was that of New Zealand or Australia against the Japanese Yen as the funding currency. However, when the global recession began to hit, interest rates and assets all over the world also fell, which greatly reduced the difference in interest rates. 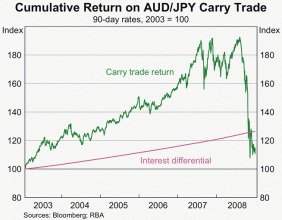 As investors saw their carry trades losing value, they quickly offloaded their positions, selling back assets in the alternate country and buying back the funding currency. While this was a wise move, it only made matters worse for those who were not quick to pull the trigger. You see, by selling one particular currency, you reduce its value, while buying another currency increases its value due to increased demand.

Subsequently, the difference in interest between the alternate currencies against the funding currency dropped and even went into the negative region, causing investors who closed their positions late to lose a lot of money. The once lucrative leverage offered by the brokers quickly turned against the investors, forcing them to pay a lot more than they had even invested.

At the moment carry trades are still very popular, and I would assume that you might be thinking about making such trades yourself after recognizing the potential profits to be made. The lesson from the 2007 event is simple, carry trade, just like all other forms of investment are very risky.

The other important factor to consider is speed; every trader is always watching the release of interest rates by central bank officials, and this affects the value of that currency. For example, an increase in the interest rate by the Federal Reserve would almost instantaneously raise the value of the US dollar, and if you don’t get into your carry trade early, then your trade won’t have much of a profit. Speed is very crucial in every carry trade, whether you’re getting into or out of a trade.

Finally, you should try to diversify your portfolio in order to hedge risk as much as possible. This means you should not make numerous carry trades around a single funding currency or alternate currency as this might cause enormous losses. It’s best to have numerous carry trades all involving different currency pairs so that you don’t lose most of your capital just because of a single news report.

All right, we’ve seen how carry trades work and their pitfalls, but are there any redeeming qualities one should consider? Definitely. First of all, carry trades have the advantage of making a profit even in periods of low volatility. Other financial instruments rely on market volatility so that the underlying security shifts in price in order to make a profit, but not carry trades. Even if interest rates remain unchanged for months or even years, you always get a profit from your trade. Furthermore, it doesn’t require extensive knowledge of market forces or the constant analysis of Forex charts, making it accessible to anyone.

All in all, carry trade is an excellent investment opportunity for a trader, and is one of those financial instruments you can make use of when you can’t find a good trade to place in the other markets.

There are still some pundits who don't favour the carry trade, and here's an illustration why: