0.00
EUR/USD
GBP/USD
USD/JPY
USD/CHF
AUD/USD
BRENT
Gold
Bitcoin
Risk Warning: Your capital is at risk. Statistically, only 11-25% of traders gain profit when trading Forex and CFDs. The remaining 74-89% of customers lose their investment. Invest in capital that is willing to expose such risks.
TopBrokers.com > Forex Basics > How to earn on corrective waves

How to earn on corrective waves

Corrective waves simply refer to changes in the dominant trend that appear to go opposite to the direction of the trend. They can occur anywhere, which is why all real-time Forex charts appear rugged with up and down movements, even though market analysts may be saying that the markets are on a strong up/down trend.

As a trader, you need to be able to identify corrective waves and distinguish those from actual reversals in the trend. But, that is much easier said than done. A good strategy to help you do this is the Elliott Wave Theory which was put forward back in the 1920s. Corrective waves are a crucial part of the Elliott Wave, where the trend reverses as the markets correct themselves. (The Elliot wave theory and how to use it)

How corrective waves appear on charts

The main corrective wave pattern is the one which is created after traders realize an asset has been over-valued and begin to exit their positions. It is characterised by the reversal of the impulse wave, which was previously the dominant trend. However, smaller corrective waves can also appear along the dominant impulse waves as traders test the markets.

The impulse wave can be a downward or upward trend, but it is always the major, dominant trend. On an uptrend, corrective waves are the smaller downtrends that look like the direction may be changing.

The trends 2 and 4, on both the uptrend and downtrend, are the corrective waves that appear on the impulse wave. Wave 2 is created when markets assume the asset has already been overbought and traders close their positions, causing the direction of price to reverse. This sentiment is usually backed by oscillating indicators which can either show an overbought market on an uptrend or oversold conditions on a downward impulse wave.

The third wave occurs when more people get in on the action, causing prices to move significantly in one direction. Then, wave 4 will form when many traders take their profits and close open positions. So, the impulse wave will have 2 corrective waves, but these are usually smaller compared to the main corrective wave.

According to the Elliott Wave theory, markets will correct themselves when the underlying asset has been overbought or oversold, and this market correction will occur in the main corrective wave. 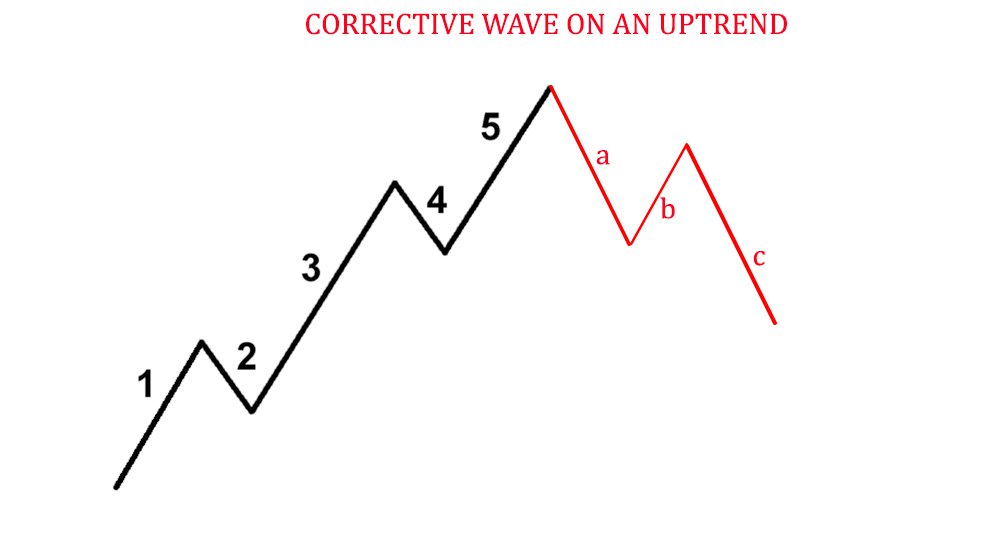 After an uptrend is over, the trend is going to reverse in a corrective wave pattern. This is characterised by the 3 waves A, B and C as you can see in the image above. Wave A is the first sign of the corrective trend starting to form and it is the result of traders realizing just how overbought the market is and getting out. It doesn’t last long, though, because there will still be people assuming it is just another correction in the market before the uptrend continues.

After the dip by wave A, other traders will enter long positions casing the uptrend to resume on wave B, but only shortly before news breaks that the asset has been overvalued. This will cause the trend to reverse completely, and wave C will be a strong downtrend. A similar situation can occur in a downtrend, too, and you can just flip the chart above to something like this: 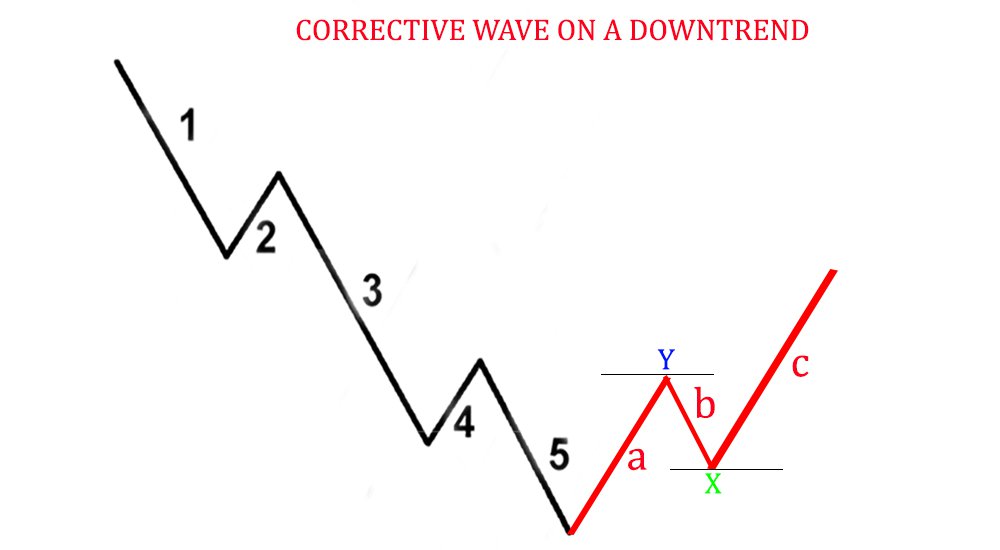 How to spot corrective waves for profits

In the illustrations above, it would obviously be more profitable to buy the asset after corrective wave B had pushed prices lower to point X than to buy at point Y and have to suffer drawdown to X before you started making a profit. On the other hand, it can be tricky to spot and distinguish a corrective trend from an actual trend reversal. To improve your chances, here are a few tips:

The corrective wave is usually shorter than the previous trend

Anyone familiar with candlestick patterns knows that trend reversals can be identified by engulfing candles because it shows shifting market sentiment. (Forex market sentiment indicators) The same argument can be made for corrective waves – if it is shorter than the previous trend, then the market sentiment has not changed. Let’s see how this can be spotted on the Forex trading platforms:

Use other technical indicators to confirm

The image above represents the same currency pair as the previous image, but this time with the peaks and troughs connected to readings from the stochastic indicator. In every situation where there was a corrective wave, the corrective trend always dropped to overbought or oversold territory long before it could engulf the previous trend. You can see this at points C, E and F. For point H, markets became oversold only after going below the previous trough at F, which showed that the trend had indeed turned.

When using the Fibonacci retracement tool, the most important levels are the 38.2% and 61.8% levels. The 50% level usually acts as a pivot point, but the other points usually provide critical support and resistance levels, which are crucial when looking for corrective waves.

As mentioned earlier, always buy as low as you can and sell as high as you can. When you notice a change in the overall trend, use the technical indicators mentioned above to confirm if the trend is turning. If markets become oversold in an uptrend before market prices hit a lower price than the previous trough, then this is probably a corrective trend. On the other hand, if the indicators show oversold conditions after market prices are below the previous trough, then the trend has turned. Doing the opposite on a downtrend will also work because corrective waves work both ways.

For more illustrations of corrective waves, here’s a video showing it in action: