0.00
EUR/USD
GBP/USD
USD/JPY
USD/CHF
AUD/USD
BRENT
Gold
Bitcoin
Risk Warning: Your capital is at risk. Statistically, only 11-25% of traders gain profit when trading Forex and CFDs. The remaining 74-89% of customers lose their investment. Invest in capital that is willing to expose such risks.
TopBrokers.com > Forex Basics > Secret of Monday's Gap Trading

Since the past few years however, gaps especially over the weekends have become a common occurrence in the forex markets as well. This is likely to do with the fact that the currency markets these days tend to follow the political developments as well as the economic developments.

These factors have become a contributing factor to the increased frequency of gaps seen in the forex markets over the weekends.

A gap goes by many different names including trading gaps or area gaps.

When it comes to the gap trading methodologies, there are many different approaches. The most common is based upon the premise that 'gaps are meant to be filled.' Gap trading can be used both within the long term trading strategy as well as for short term scalping or day trading as well.

The Monday gap trading is something that is widely talked about in the forex markets. It is also one of the simplest ways to trade the currency markets.

What causes gaps in prices?

Gaps in prices are formed when there is a lack of liquidity in the markets. A gap is formed when the current day’s opening price is significantly different (can be higher or lower) from the previous day’s closing price.

A gap is often said to be an important level as it indicates that something significant has occurred in the markets. In the context of the stock markets, the price gaps are formed on earnings release or on ex-dividend dates.

The chart below gives an example of a gap in the USDJPY markets. You can see in Figure 1 that the closing price on Friday was at 114.038 and Monday’s opening price was at 113.870. The price difference of 16.8 pips is the gap that was formed in prices. 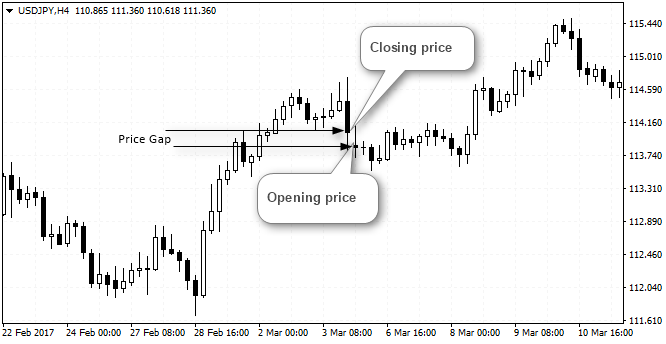 Gaps are formed because of illiquid market conditions, meaning that when there are no buy or sell orders at the nearest price. Thus, price gaps to the best available price. Going back to the above example, the best price was available at Monday’s opening price of 113.870 which is where price eventually opened the week at.

Gaps are classified into three types:

Breakaway gap is said to begin at the start of a new trend (it can be a downtrend or an uptrend) and as the name suggests it occurs when price was trading within a range for a prolonged period of time. The breakaway gap signals the new trend depending on which way price gaps out. 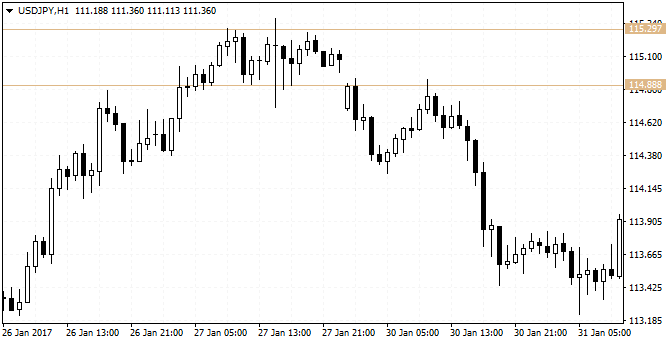 Runaway gaps are formed within the trend and are ideal in terms of trading with measured moves. The runaway gap comes amid increased interest in the asset and traders need to first ascertain the prevailing trend before trading the runaway gap. It is often said that price will move the same distance as the gap that was formed at the very minimum. 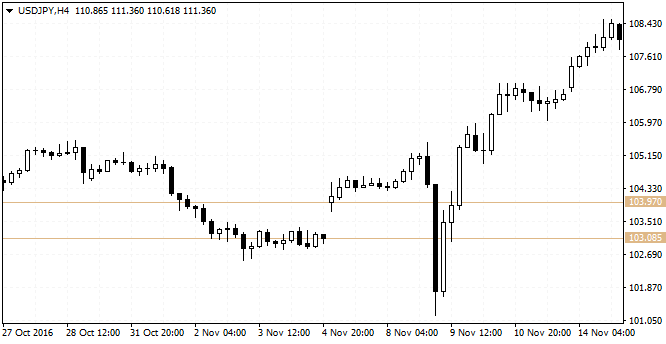 Common gaps as the name suggests are the most common type of gaps that are formed. The common gaps occur frequently and the Friday-Monday gaps are often known as the common gaps at least as far as the stock markets are concerned.

From a forex perspective, depending on where the gap occurred in the trend or the price action, the appropriate type of gap can be assigned.

The gaps that are formed on Monday’s in the forex markets are one of the easiest ways to day trade the currency markets in the short term. Gaps formed on JPY currency pairs exhibit higher volatility and make for a better choice of currency pairs to trade.

Although gaps are meant to be filled, this is not always the case and at times price can take months, if not years for the unfilled gap to be filled eventually.

For traders who want a reasonably sound trading strategy, a gap based trading approach is one that can be easily understood and simple to trade as well.