0.00
EUR/USD
GBP/USD
USD/JPY
USD/CHF
AUD/USD
BRENT
Gold
Bitcoin
Risk Warning: Your capital is at risk. Statistically, only 11-25% of traders gain profit when trading Forex and CFDs. The remaining 74-89% of customers lose their investment. Invest in capital that is willing to expose such risks.
TopBrokers.com > Forex Strategies > Abid trading method

I have learned the hard way not to stare at Forex charts continuously, especially if you have an open trade. Two things can happen:

Trading has a lot to do with psychology and mastering your emotions, and you need to come up with a solution that works for you. Me, I either leave my station after placing my day’s orders, in case of a long-term strategy, or switch to my demo account and play around with other indicators. To this day, I still don’t know what all of them do, or how to work with them, but recently found one very interesting one – envelopes.

For this trading method, there will only be one custom indicator, as the rest will already be pre-installed along with your Forex trading platforms.

It is used to determine if the market is overbought or oversold by comparing the closing price with the average range over a period. Consisting of two lines, it is a very popular indicator used to determine divergence and market conditions (Find the best technical indicators and learn how to use them).

You will need to change the parameters depending on your timeframe as such:

In the Forex charts above, you can see all the areas when the stochastic indicator was late for the party, while the Williams’ %R had already reached a peak or trough. In short, it’s faster in recognizing when markets are overbought and oversold. This is an advantage to scalpers and short-term traders, to who this trading strategy is dedicated. We’re still going to slow it down a bit by increasing the period to 35 in the ‘Parameters’ tab.

The RSI indicator is also an oscillator used to know when markets are overvalued or undervalued. Compared to the stochastic and Williams’ %R, it’s an even more lagging indicator, which is why peaks and troughs are determined as soon as they reach the 70 and 30 marks respectively. That’s how lagging it is.

However, the advantage is that so many traders use it that it becomes a self-fulfilling prophecy. In our strategy, it will be important in confirming whether the trend is actually reversing in order to avoid fake-outs. After all, the other indicators we’ll be using are all very fast.

Calculating MFI begins the same as the RSI, but afterwards volume is added, this way we get to know how many positions are being taken to one side or the other. It’s best then to use the MFI in search of divergence. With this one, we’ll set the period to 21 in ‘Parameters’. (5 secrets of Divergence in Forex)

For example, if prices keep going up while the MFI is going down, it tells you the bears are shorting that market heavily and prices might start to go down.

At first, this indicator will seem like the Bollinger bands, except this one is calculated as a moving average, but two of them simultaneously. Whereas a single moving average is drawn within the candlesticks, envelopes are drawn around them. As a pair, they show you the upper and lower margins of the candlesticks, so that you know when the price has hit a top or bottom.

This will be our main tool, and we’ll need 3 of them. I already mentioned there are two of them and they are created through the deviation of a single moving average on either side. In our strategy, we’re going to use 3 deviations: 0.62%, 0.38% and 0.23%. Depending on your timeframe, you may have to adjust the deviation, but these values work well on the H1 and H4 timeframes. All you have to adjust is this bit right here… 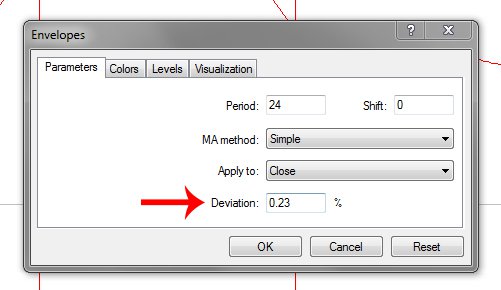 This last one is just to help you know when the trend is ready to turn – a visual that makes your life easier because there’s no analysis. It’s also the only indicator in this strategy you will need to download (at the bottom of this page). I have included it because it helps me identify trading opportunities without having to study all the other indicators – you can just drag the pairs from the ‘Symbols’ window one by one until you find the one with a red or green dot at the right time.

With all the technical indicators loaded, your trading window should look something like this:

We’re going to use the chart above to identify which would have been the ideal positions to enter and exit trades.

The first thing you should look for is the red or green dot of the SHI_Silvertrend indicator. If it’s green, that means there’s an opportunity to buy the pair and vice versa. To know the exact moment when to place the trade, check:

You will also notice how the SHI_SilverTrend signal indicator comes first before all other indicators. A risk-taker can immediately enter the position at that point, in which case they would gain more pips, but I prefer to be conservative, wait until all indicators line up and confirm the market direction.

Leaving the open position will also depend on your risk appetite, because a trend can show some signs of reversal and then resume the previous direction after testing the markets. The safest way would be to close the trade as soon as prices get to the other side of the envelopes.

I advise that you close the trade partially if the prices reach the other end of the envelopes, then wait until the Williams’ %R and stochastic indicators show the markets have reached the other end. The RSI indicator is slow to respond while MFI will only signal a reversal of the trend when market sentiment has already shifted, which could be too late.

If you’re a risk-taker, though, wait until the SHI_SilverTrend signal indicator changes to the opposite colour from when you entered the position. It’s risky because the trend may have already turned, taking away some of your profits, but sometimes you catch the entire trend, even more than what the conservative and cautious traders did.