0.00
EUR/USD
GBP/USD
USD/JPY
USD/CHF
AUD/USD
BRENT
Gold
Bitcoin
Risk Warning: Your capital is at risk. Statistically, only 11-25% of traders gain profit when trading Forex and CFDs. The remaining 74-89% of customers lose their investment. Invest in capital that is willing to expose such risks.
TopBrokers.com > Forex for Beginners > Profiting From Carry Trade Candidates

For example, let's take the currency pair New Zealand Dollar and the Japanese yen (NZD / JPY). A trader takes a loan in Japanese yen and converts the entire amount into New Zealand dollars. Then he buys New Zealand bonds with annual interest rate of 8%. As a result, the investor receives 7.5% of net profit (8% - 0.5% of Japan's rate). 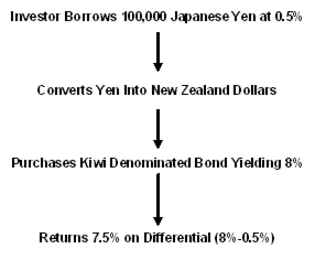 Moreover, in this case, the trader can still make extra money if the exchange rate with higher interest rates strengthened. For example, in the same currency pair NZD / JPY, traders thanks to Carry Trade earned 20.6% per annum in addition to the appreciation of the New Zealand dollar in 2007. To choose the best broker you can use the section «Compare Forex brokers».

In creating a  forex market strategy, Carry Trade is also widely popular. The essence of Carry Trade strategy in forex expressed in the transfer of the value date on the next trading day. But this trading currency pairs must have different rates, the greater difference - the better it is.

Opened positions in Forex, which are transferred to the next day, charged swap - fee for the transfer. The size of swap depends on the interest rates of countries, currency trading and displayed in the appropriate Forex trading platforms box. At the same time, the swap may be positive for the trader or negative, depending on which is the base currency in the pair.

According to the strategy of Carry Trade positive swap for transferring the position is not additional income, but basic, which in turn makes the currency exchange difference as additional income.

Those currencies that have higher interest rates are considered as highly profitable and those that have a low rate - low-income. Carry Trade strategy involves the selection of currency pairs, so that orders are buying the currency with the higher rate for the currency with a low rate. For example, to date, the high interest rate is considered in Australia (2%) and New Zealand (2.75%). Consequently, for the Carry Trade perfectly suited such cross-rates with these currencies and, for example, the Japanese yen, with a negative rate: AUD / JPY, NZD / JPY.

Carry Trade strategy is really effective when we speak about margin trading. Using the leverage of 1: 100, which is offered by most of ECN Forex brokers and Carry Trade strategy will earn in a year 200% of the income from the difference in interest rates of 2%.

However, early to rejoice. Carry Trade Strategy has a number of drawbacks. Mainly, this strategy is suitable only if there is stability in the market, and there are no preconditions for a sharp rate changes. The fact is that if the high-yielding currencies will decline in price, the foreign exchange loss will exceed profit on swaps. However, even if the general economic mood is positive, there is no guarantee that the situation in the country issuing the currency will be favorable for growth. Besides, this is not the kind of strategy scalpers can use to make money, or even day traders, and it is most suitable for swing traders.

Consequently, Carry Trade strategy can be considered quite risky. The fact that the high interest rate countries are not countries with a stable economy, and therefore, their currencies are predisposed to devaluation. In case the period of economic and/ or political instability in a high interest rate countries, the majority of investors prefer to transfer funds into more stable currency like it happened before Brexit, which leads to an even greater drop in the exchange rate. In this situation, the presence of open positions on the Carry Trade strategy can not only bring profits from swaps, but also generate significant foreign exchange losses. The section «PAMM Forex brokers rating» provides the information about the ranking of Forex brokers.

It is also an important factor in the level of interest rates is the policy of the central bank. Interest rates can be changed by central banks to influence financial and economic situation in their countries. Changes in interest rates may significantly affect the exchange rate and consequently the results of trading on Carry Trade System.

Another intervention by the central bank may be foreign exchange intervention and buying currency on the domestic market. These actions are aimed at correcting the country's economic indicators and the market sentiment, such as inflation, the rate of the balance of payments, and so on. More often than not, such measures are taken at once and again, may affect the rate of the national currency of the country.

From this it follows that for Carry-trader is very important to constantly monitor the economic and political news of those countries whose currency it trades. This is important, as it allows to react to changes in the market situation. In the section «best banks offering Forex trading» users can get the information about bank offers.

To minimize the risks experienced Carry-traders usually trade a basket of currencies, that is, several currency pairs, which can both be correlated with each other, and be completely different. Thanks to trade a basket of currencies takes place to minimize the risk through diversification, as if, say, one of the currency suffered depreciation, profits from swaps and foreign exchange gain of other currency pairs can compensate for the losses and make a profit.

However, it should be understood that trading with the help of Carry Trade Strategy, and particularly the currency basket, requires a fairly large investment. Since this strategy is long-term, the deposit has to withstand strong price fluctuations. In addition, unlike most of the strategies in the financial markets, Carry Trade does not involve the use of Stop Loss, which greatly increases the risks. To avoid the mistakes with the choosing of broker it is strongly recommended to read this section «How to choose a Forex Broker?»

First of all, it must be remembered that Carry trade is long-term strategy, which is designed more on investors than traders. Large investors, including leading banks often hold their positions for many months and even years. It should also be understood that it is thanks to the demand for currency the trend is formed. This should take into account short-term traders, as the currency pair with the big difference in interest rates, it is safer to buy the currency with the higher interest rate. But by and large, this strategy has little value for intraday trades, but when trading in longer time intervals (weekly, monthly) it should be taken into consideration.

Here is an example of a carry trade to help you understand exactly what they are:

Was the article useful for you?
Forex for Beginners
Add comment