0.00
EUR/USD
GBP/USD
USD/JPY
USD/CHF
AUD/USD
BRENT
Gold
Bitcoin
Risk Warning: Your capital is at risk. Statistically, only 11-25% of traders gain profit when trading Forex and CFDs. The remaining 74-89% of customers lose their investment. Invest in capital that is willing to expose such risks.
TopBrokers.com > Forex Basics > What to watch for during the Trump presidency

What to watch for during the Trump presidency

It’s a new era in the US government with the election of Donald Trump as the 45th president of the USA. Pundits have speculated that his unprecedented win was due to his promises of reform and change in various aspects of the economy. Already, Trump’s 3-week presidency has already caused waves in the Forex market, and I have the feeling this is just the tip of the iceberg.

To ready you for the future, I’m going to focus on some of the changes you can expect to affect the Forex calendar so that you can be prepared when they are finally put to action.

One of the main campaigning platforms Trump used was promises of trade reforms. His allegations of currency wars and unfair trade partnerships signalled that he was going to change most of them. One of his first actions was to withdraw from the Trans-Pacific Partnership (TPP) on the 23rd of January 2017, 3 days after his inauguration. The deal took Obama 7 years to bring together 12 countries and enhance trade among them by reducing trade tariffs.

Trump’s argument was that these countries were taking advantage of the lowered tariffs to increase their exports and benefit their countries at the expense of the US. Besides the TPP, Trump has been pointing at China for currency devaluation, even calling for it to be declared a tax manipulator. Unfortunately, this action is out of his hands and has to be exercised by the US Treasury Department, which so far has said that China does not meet the criteria of a currency manipulator. On the other hand, Trump has nominated Steven Mnuchin as the secretary of the Treasury Department, his pick, who just might favour Trump’s views. Anyway, we’re yet to see if this will happen, but I suspect it will.

Besides China, he has accused other countries like Japan and Germany for taking advantage of their weaker currencies. He didn’t do this directly, but his top trade advisor did, and it sparked outrage from the countries mentioned. This caused the US dollar to drop a little bit. Due to his hostility, many European countries are looking at other countries for trade, especially China and other emerging economies in Asia. When it comes to the UK, Trump and Theresa May seem to be getting along well, and there just might be a trade agreement established between the two nations. This might be great for both the US dollar and the sterling pound if such a deal goes through.

Trump’s trade policies have already seen the US dollar index dip below the 100 benchmark showing its first signs of weakness after months of growth. Implementation of the above policies might further weaken the dollar, but perhaps this is part of his plan to subtly devalue the US dollar so that it remains competitive. The recent strength of the US dollar against its trade partners had been impeding its trade balance, and the weaker dollar might boost trade once more.

The president promised tax cuts across the board, meaning that everyone would pay lower taxes. To understand how his tax brackets, differ from Obama’s, here is a chart from his own website: 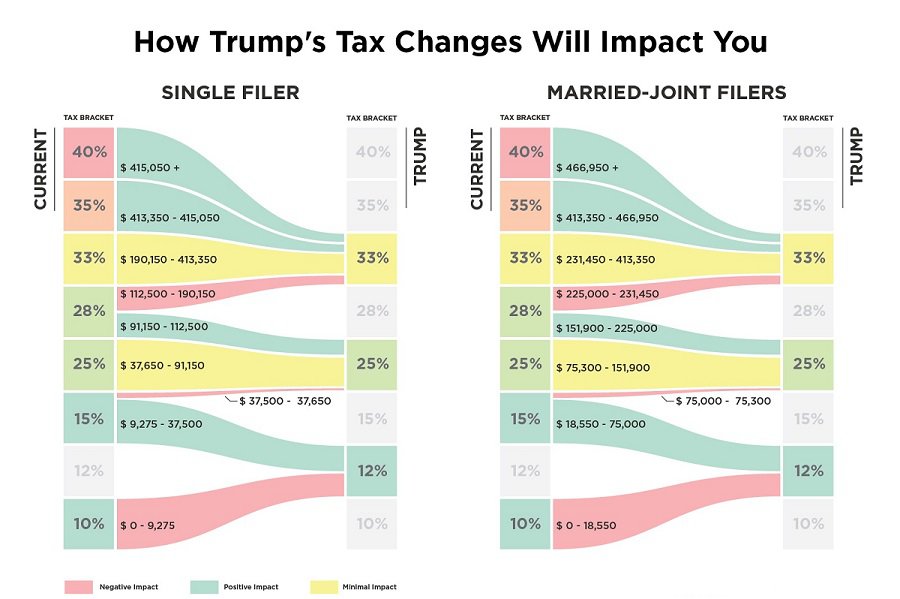 The effect of lower taxes, especially for the top earners who were paying almost 40% in income tax is not going to be immediate. You’re probably going to experience a change after a few weeks or even months when the balance of trade in the US becomes more negative. To counter this, the Federal Reserve (FED) is going to raise tax from the current 0.750%, probably a few times this year. It is not clear how much revenue the FED is going to generate from these increased taxes, but it probably won’t cover all the deficit.

A further deficit will be observed from the biggest change in tax, corporate tax. These will drop from the current 35% to 15%, which is more than a 100% decrease. The idea behind these cuts is that companies will save more money and will therefore hire more people, reducing unemployment. The idea seems plausible, but we really have to wait and see how it works out. If implemented, it will cause the value of the US dollar to rise because more investors will establish businesses in the US.

There is also a border adjustment tax that is not being mentioned too often which will exempt imports from corporate tax while exports will be subject to the tax. This would further encourage foreign investors to buy US assets and stocks, while US investors in foreign countries will have to pay more than they did before. For example, an English investor could buy stocks at the New York Stock Exchange (NYSE) without any tax, but an American investing in the London Stock Exchange (LSE) would be subject to tax. (How to trade on the NYSE)

The silence around the issue suggests that there is no urgency to the matter and we’ll have to wait and see if it’s put to action. (Basics of stock trading)

According to Trump, several reforms by Obama were detrimental to the growth of business and today, on the 3rd of February 2017, Trump removed both the Dodd-Frank Wall Street Reform and Consumer Protection Act. These measures were supposed to restrict many banking activities, but their removal will provide carte blanche to hedge funds, banks and other financial institutions. Looser measures might also affect Forex regulators, which could be good news for the best Forex broker in the US.

Need to know the best US regulated Forex brokers?

These reforms are bound to stimulate the US economy even farther, and the US dollar could become bullish in the coming months after the effects of the reforms start to be felt. There is also the promise to streamline tax collection, putting an end to unnecessary federal programmes and eliminating incorrect payments. All these are supposed to provide added revenue to the country now that there will be less taxes coming in.

This is perhaps one of the areas where the new president will shine the most – he plans to revive American industries by encouraging industries. The coal and natural gas industries had been stalled by Obama’s responsible energy production policies. Trump wants to encourage mining of oil, coal, natural gas and shale so that America can become energy dependent. This would untangle the US economy from the whims of OPEC nations while at the same time providing thousands of jobs. 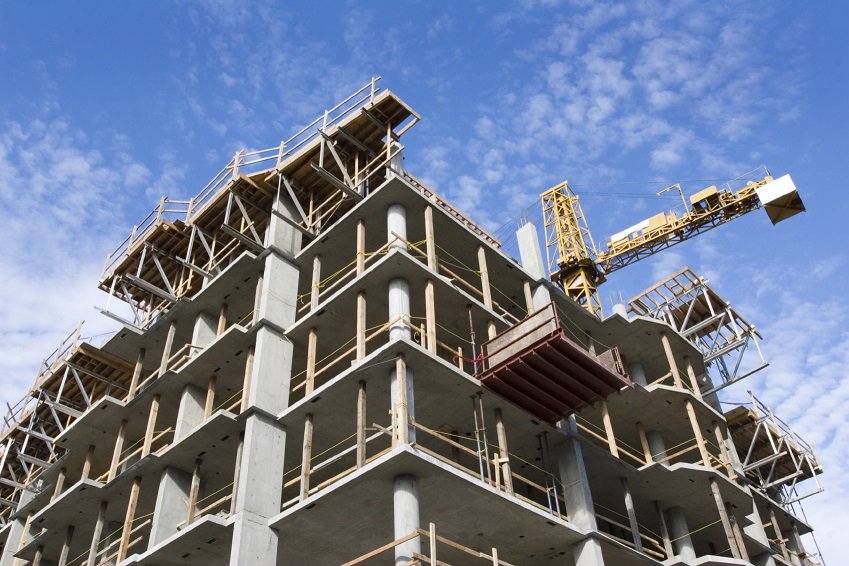 The same will be felt through vast construction projects which will encourage steel, telecommunication and transport industries. the military is also set to receive a boost by increasing the size of the army, building of more ships and aircraft and other missile defence systems. The idea here is to focus the nation’s resources to the local workforce rather than engage in globalization and improvement of other countries.

This was the very first action taken by Trump only hours after his inauguration, rolling back the affordable care act, Obamacare. Although he signed the executive order so long ago, implementing of it will take far longer, probably months or even years. The problem arises because Obamacare is already in regulation and it cannot be simply nullified. To roll back the plan, the new health secretary would have to create another plan and then slowly replace Obamacare with this new plan, a plan named ‘repeal and replace’.

According to the US president, Obamacare was a burden because most people were mandated to sign up or face penalties. If the Affordable Care Act is replaced with another system which doesn’t impose huge costs on the people, we could actually see the financial burdens lessened from many Americans. The result would be an increase in saving and spending, which would stimulate the economy. The insurance companies would also benefit from a repeal of Obamacare, giving them more control and flexibility to operate across states. This could also further stimulate the economy.

There have been several protests this week because there have been people stranded at airports after Trump passed an immigration reform act by executive order. This got people panicked because they imagined that he was going to deny access to immigrants into America. According to the White House Press Secretary, though, this wasn’t the case, and the act only called for stricter measures of screening for immigrants. Nevertheless, it was enough to cause a panic and make the value of the US dollar to fall slightly. Further reforms to immigration policies might cause further turmoil and cause the value of the US dollar to shift, but again, this is another one we’ll have to wait and see.

If there’s anything we’ve learned from the new US president is that he can be unpredictable, but underneath it all he seems to have a plan. Yes, the plan may be protectionist, but isn’t that what every president should work for, their own country? Then again, every leader usually has a plan for their country, and these plans do not always work.

So far, Trump’s reforms have fitted his plans, to resume a competitive advantage in the international markets by halting the US dollar’s strength. As we saw before in a post about how the US elections would affect the US dollar and economy, effects may not all be short-term, and we might only start to notice any changes after a few months.

(How the 2016 US general election affects traders)

I’m not yet ready to cheer Trump on, but I have to say he wasn’t as much a wrecking ball as everyone assumed. Maybe he actually did earn his fortune from wise and deliberate measures, not luck, and he just might sprinkle the same magic on the US economy. Let’s wait and see; and keep an eye on the real-time Forex charts.

Some pundits may have seen the benefit of a Trump presidency, such as this guy here: