0.00
EUR/USD
GBP/USD
USD/JPY
USD/CHF
AUD/USD
BRENT
Gold
Bitcoin
Risk Warning: Your capital is at risk. Statistically, only 11-25% of traders gain profit when trading Forex and CFDs. The remaining 74-89% of customers lose their investment. Invest in capital that is willing to expose such risks.
TopBrokers.com > Forex Basics > Main central bank meetings

The role of any country’s central bank is to keep the economy of the country it represents balanced. This means balancing between ideal market conditions for its citizens while maintaining a competitive advantage in the international markets. It’s not an easy task, yet it lies solely on the institution, so every decision they make is crucial.

Besides them, these meetings are very important as we saw in a previous article on trading using central banks’ reports.

Which are the main meetings to watch?

Besides their main duties, every central bank is supposed to inform the public of what they are doing, and these meetings are usually watched very closely. Fortunately, you don’t need to look at all central bank meetings, you wouldn’t even be able to keep track of them. Instead, there are a few central banks whose meetings cause a stir in the markets, and these are the ones to watch. 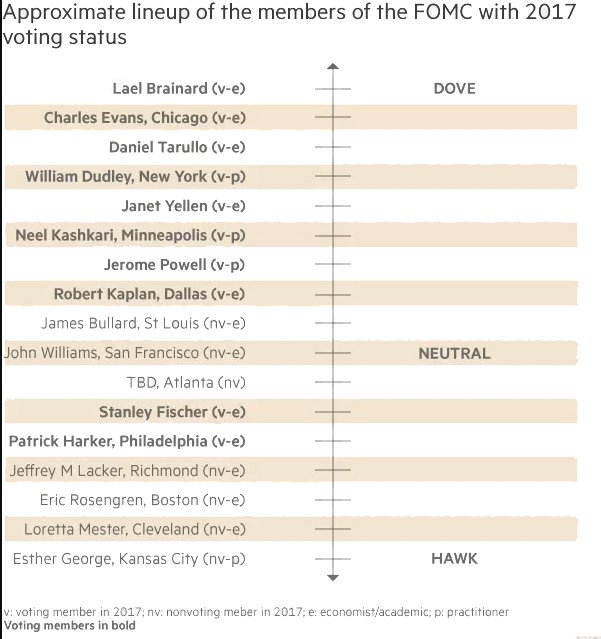 There are 8 formal meetings every year, in which the FOMC informs the public on their decision. In between, though, some of the FOMC members will speak before congress or hold speeches at different events. Any word from any of the FOMC members is usually dissected for clues, and the markets will react immediately depending on market sentiment toward the statement. This is why you will often hear traders talking about FOMC members being dovish or hawkish about the markets.

For example, the most recent meeting held by the FOMC was on the 1st of February, in which the FED did not raise interest rates. However, traders pried clues from some of the statements made by the members. For example, on the 3rd of March 2017, Janet Yellen, the FED chair said “… the process of scaling back accommodation will likely not be as slow as it was in the past couple of years…” By hinting at a possible scaling back of accommodation, this indicates a hawkish sentiment, which traders took to be a sign of an interest rate hike on the next central bank meeting on the 14th of March 2017.

See how the US dollar gained strength? This is how traders make predictions, and you can see that these statements usually have a huge impact on the Forex markets from the real-time Forex charts above.

Even before the Brexit, the BoE was still in charge of regulating monetary policies affecting the pound. The previous announcement was made on the 2nd of February 2017, and they decided to keep the interest rates at 0.25%. Here’s what happened:

On the matter of the future, experts don’t expect any interest rate hikes this year. Sure, inflation is up, but this could be attributed to the Brexit referendum (How the Brexit affected Forex trading). So, on the 16th of March, during the next BoE announcement, we expect another dip in the sterling pound’s strength.

This central bank is in charge for setting monetary policies for the entire Eurozone, so it too will cause a stir in the Forex markets. The head of the ECB is Mario Draghi and he has maintained a very dovish outlook for the past year by keeping interest rates at 0.00%. During the previous ECB meeting held on the 19th of January 2017, the rate was still maintained.

As a result, the euro lost strength which you can see from the sharp dip in the chart above. However, experts believe that the ECB might have to raise interest rates sometime this year to keep inflation rates under control. Inflation right now is at 0.9%, and the ECB would like to keep it below 2%. The next ECB meeting will be on the 9th of March this week, and we might still see the rates remain unchanged.

Interest rates in Japan right now are in the negative area, at -0.1%. The previous announcement was made on the 31st of January 2017 with only minimal market movement:

This is because the Asian session is usually not very busy with most of the world asleep, plus traders were anticipating there would be no change. The next meeting is expected on the 16th of March, and we might only see a slight change. Despite the seemingly lack of volatility, traders usually watch the BoJ’s decisions very closely.

The importance of China in the Forex market is becoming very real, and decisions by the PBoC have a huge impact on markets. However, China are not very predictable and the previous interest rate hike on the 3rd of February 2017 caused a stir:

This is why the PBoC central bank announcements are important. On the other hand, only those brokers with the best Forex broker rating allow trading of the remimbi/yuan, and you can find them in the link so that you can participate.

How do you know when the meetings are?

Because every Forex trader is interested in the central banks’ meetings, they are usually found in the Forex calendar. Most calendars will highlight these meetings as high priority/impact, so you can be able to quickly find them. (See How to work with the economic calendar if you don’t know how)

The trading volume will rise significantly shortly before and hours after an announcement is made after a central bank meeting. You will be able to tell this from your Forex trading platforms which will have a lot of activity. Some people like to trade during these times, but others will avoid them because of the high volatility. What you decide will have to do with your particular trading strategy. (Don’t know how to choose a trading strategy?)

You should also confirm whether your broker will make any changes to the spreads during the central bank meetings – most do. Perform a Forex broker comparison so that you still enjoy tight spreads.

For an example of how these announcements are made by central banks, here’s the one by Janet Yellen: