0.00
EUR/USD
GBP/USD
USD/JPY
USD/CHF
AUD/USD
BRENT
Gold
Bitcoin
Risk Warning: Your capital is at risk. Statistically, only 11-25% of traders gain profit when trading Forex and CFDs. The remaining 74-89% of customers lose their investment. Invest in capital that is willing to expose such risks.
Forex Brokers > Forex Basics > Looking for market correction

If you take a look at Forex charts, they look chaotic and messy, even when all the experts are claiming there is a strong uptrend or downtrend. There are only very few occasions when you will see a continuous trend in the market, because the markets will move in alternating upward and downward trends. These slight changes in the direction of the trend are due to market correction, and they can have several uses to a Forex trader.

What is market correction?

As you can tell from the first glance, this pair is in a bullish trend and the price is going higher. However, the areas marked with an arrow are not adhering to the general upward trend and price is dropping at these points. These opposite trend movements are what we call market correction, and they are found in all markets including stocks and in all market situations, whether bullish, bearish or oscillating. (Remember the Elliot wave theory and how to use it)

A bullish market is marked by the candlesticks making higher highs after every correction. You can see this on the chart above where point B is higher than point A, and point C higher than point B. This is a classic upward trend, but today we’re going to focus on the corrections 1, 2 and 3 – how to recognize them and make use of them.

How to recognize market correction

It is important to be able to identify market correction and differentiate it from a trend reversal.

One of the most obvious indicator is the formation of higher highs and higher lows after every time the market price changes direction. In the above example, the trend was maintained all through, but see what happened afterwards:

Market correction went on to point 4, after which the uptrend continued, but this time it didn’t form a higher high. As you can see, level C and D are practically equal, which indicates that the uptrend was possibly over. Remember, an uptrend has to keep forming higher highs after every market correction, if it doesn’t, like at point D, then the market is no longer considered bullish.

You should also incorporate some technical indicators into your Forex charts in order to recognize market correction more effectively. The most powerful indicator for doing this is the Fibonacci retracement indicator, which was created for this specific purpose.

When the Fibonacci retracement was drawn up to the highest point, A, the market corrected to point 1. At this point, the market tested but was unable to break the 38.2% level and this can even be confirmed by the formation of the doji candlestick. This would have indicated to a trader that the downtrend was probably just market correction, and they would have held on to the position.

By using the Fibonacci indicator, a trader would have kept their position open regardless of point B not breaking above 0%. Their confirmation to exit would come when the subsequent uptrend after correction at point 2 failed to break the 23.6% Fibonacci level.

Such a trader would have made a bit less pips than the one who closed their position earlier, but their plan based on patience was the better one. This strategy of patience works more often than not and you can see it working well here:

Here, the trader who used the Fibonacci retracement was better off than the one who only looked at the price channel. The Fibonacci indicator shows that the downtrend failed to break the 23.6% level, indicating that the downtrend was actually market correction. Confirmation from the exhaustive candles at the point marked by the arrow would have been further confirmation of market correction.

In the above scenario, traders who didn’t use technical indicators would have assumed there was an actual downtrend because price at point A didn’t reach the upper price channel. If one had used the stochastic indicator, though, it would have shown an oversold market condition and they would have held on to their position, with positive results.

In the previous case, when it was an actual downtrend rather than market correction, technical indicators would have also showed this.

The stochastic indicator would have told the trader at point C that the market was overbought and that there was an oncoming downtrend.

How to use market correction

Once you know how to identify market correction, and differentiate it from a trend reversal, you will be better placed to:

We all know the biggest profits are not gained from short-term trades but from long-term trades. I doubt there are any millionaire scalper who exits the trade within a few minutes, and if you listen to all the successful investors, they will tell you that they made their millions from only a few trades and not hundreds. The trick is to let your winning trades run for as long as possible before closing out the position. These great traders have mastered the art of patience, and made fortunes such as Warren Buffet who advises: 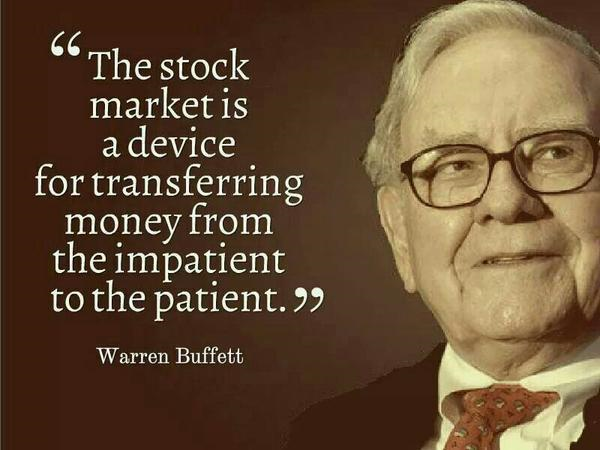 (Learn the 10 steps of successful traders)

So, now we know to be patient once you open a trade, but that doesn’t mean being arrogant or hoping for miracles. You also have to know when a trade is bad and get out ASAP and avoid one of the 10 most common mistakes Forex traders make. Here is where market correction will help you tell whether the trend is done or just testing the markets. If you use this principle wisely, you will be able to hold on to your winning trades for longer and make a lot more than a short-term trader, thereby maximizing your profits.

Know when to enter and exit positions

This is the most difficult decision any trader will ever have to market - when to open and close a trade. If you open or close a trade too early, you will lose some of your profits, and the same for opening and closing trades too late. Timing is very important, yet it’s very difficult to determine. In fact, it is so difficult that traders will fall into 2 major categories, either cautious or risk-takers.

Cautious traders will prefer to enter and close trades late so that they can accurately determine the direction of the trend. This allows such traders to avoid fake-outs and minimize losses, even though they lose out on the entire trend. Risk-takers, on the other hand, will enter trades early and close late to take advantage of the entire trend. This might get them caught in fake-outs, which they compensate for with the profits from winning trades.

What if there was a way to improve your chances? Learning about market correction has this benefit because you will know when the trend is still active and hold on to your trades rather than closing them too early as we have seen in the examples above. There’s also the advantage of waiting for market correction so that you can enter trades at the best price. If you did not catch the trend from the very beginning, you would want to wait for the markets to correct so that you can catch more of the trend and reduce drawdown.

In the above examples, we have looked at a bullish market, but market correction happens in both bullish and bearish market situations – you just have to invert the principles. Finally, we’ve also looked at major trends in the market that last for a few months, which is why I used the daily chart. As you can see, there are huge profits in this approach, but it is more of an investor strategy, for someone who does not have time to sit in front of their computer all day.

For swing traders and day traders, you can use timelines as low as the M15 charts to look for market correction. Going lower than this is not advisable, because there are too many trends that it is more difficult to identify the main one. Keeping this in mind, don’t forget to practice on a demo account or other less risky types of accounts. Make sure you master the principles of market correction before using it on your actual account. (Types of Forex trading accounts)