0.00
EUR/USD
GBP/USD
USD/JPY
USD/CHF
AUD/USD
BRENT
Gold
Bitcoin
Risk Warning: Your capital is at risk. Statistically, only 11-25% of traders gain profit when trading Forex and CFDs. The remaining 74-89% of customers lose their investment. Invest in capital that is willing to expose such risks.
TopBrokers.com > Forex Basics > How the 2016 US general election affects traders

How the 2016 US general election affects traders

This year’s general elections will be held tomorrow, on the 8th of November 2016, and features the battle between Donald Trump and Hillary Clinton, the republican and democratic party nominees respectively. Tomorrow’s elections have been called the ‘bloodiest’ by pundits on either side primarily because of the personal attacks, but also because of the varying opinions by the candidates on how they are going to alter the country’s policy.

The time before any major financial news announcement presents a period of uncertainty in the markets, and there are usually experts on opposite sides. Historically, US indices have grown significantly on the 4th year of a president’s term before general elections, but currencies are a bit different. Forex traders may have already noticed that the US dollar has been gradually declining in strength over the past few months, and this is because of the uncertainty the elections bring.

In this periods of uncertainty, investors choose to invest in countries believed to be ‘safe and stable’ like Switzerland and Japan. Therefore, the Japanese Yen and Swiss Francs are great currencies to be long on, while shorting any currency pairs with the US dollar as the base currency. Already, the Swiss Franc has been on the rise compared to the US dollar, and the Swiss National Bank (SNB) has already said it is prepared to step in and control market volatility if there will be any – that’s how significant the SNB is.

Anyhow, the ‘before elections’ period is almost over, and the best thing would be to concentrate on the next session.

The day of the general elections in many countries is usually considered a national holiday so that people’s jobs won’t interfere with their ability to vote. The same was true for the US, until 1984, when they said that the stock market ‘provided a necessary service’ to the people. Due to this, election day in the US is really just another day in the office for Americans, including traders, so the markets will remain open for anyone who wants to trade US currency, stocks like Facebook and indices like NYSE.

All through the day, polls will be carried out in the many states of the country, and this will affect the market sentiment on the US dollar. The value of the US dollar will fluctuate often throughout the day, and many traders choose to stay away from US dollar crosses at this time of increasing volatility. Nevertheless, there are still some renegade traders who cherish this volatility and use it to make money by scalping. All the international news stations will be tuned to the elections, and polls will be carried out continuously, so the markets will respond very quickly to the polling results, especially in key states like Pennsylvania.

According to historical data, the value of commodities like gold drops during this period, presenting an opportune time to buy this commodity. You should still be careful because the final results will determine the long-term trend, so it’s best to wait until the results are announced, in which case the value goes up in the case of a Clinton win just like it did in 2008 with Obama.

If you’re planning to trade the results of the elections, you might have to stay up all night so as not to miss anything. The uncertainty of the election will end and the market sentiment will shift depending on the winner of the elections in the following ways:

A win for Hillary Clinton

The latest polls released today, the 7th of November, show that Hillary Clinton has a lead over Donald Trump of 4 points. Polls have not been very accurate, though, as we saw before the Brexit vote where the polls predicted a higher probability for a ‘No’ vote. Speculators are turning to sports bookies who give a 70% chance to Hillary. 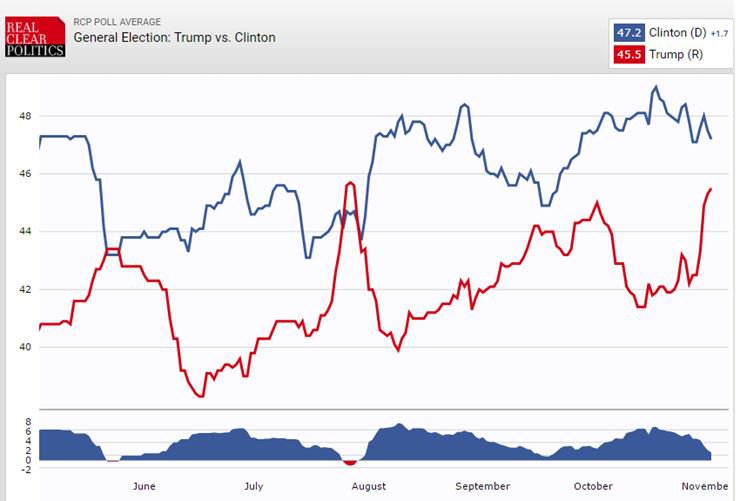 If the results are similar to the polls and she becomes the 45th president of the United States, there are little changes expected. She proposes increasing wealth distribution by encouraging equal pay to men and women, but keeping the income tax just about the same including capital tax for companies. As for the top earners making $5 million or more annually, though, their taxes would be raised from 36.9%, an already raised rate by Barrack Obama, to 43.6%.

The ideas behind Clinton’s taxation policies is to strengthen the middle and lower classes while creating enough revenue to reduce the national debt. Her plans will have a positive long-term effect, but there won’t be any noticeable changes in the near future for most people, and the markets won’t be too shaken up by her presidency. In fact, the strength of the US dollar might just continue to grow in its current trend on the news of her win.

With regard to international relations, Clinton is clearly displeased with Russia, claiming that they initiated the hacks on her emails. Given a Clinton presidency, you can expect the sanctions on Russia to continue. With trade, she seems okay with the current trade deals.

A win for Donald Trump

Trump has explicitly stated that he is going to make a lot of changes, and you can expect that the markets will respond to his presidency, if it happens. For income tax, the rate would be reduced for the top 5% earners to 33% down from Obama’s 36.9%, effectively raising their annual earnings. Corporate tax, too, would be slashed by more than half to 15% down from Obama’s 35%, encouraging companies to stay in the US and offshore companies to set up offices in the US.

Under Trump’s plan, government revenue would drop significantly and the national debt would rise, but the economy would be stimulated by the lowered taxes and increased spending by the rich. As you can see, Trump’s plan is near-sighted, focusing on ‘making America great again’ without any plan for the future. The US dollar will probably strengthen sometime next year after his policies begin to take effect, but the dollar might drop after the announcement because there will be a lot of uncertainty about his actions. In the long-term, and if he sticks to the statements made during the campaign, you might start to see the US dollar weaken as the debt to GDP ratio increases.

To cover for the decrease in revenues and the rising national debt, Trump has said he intends to renegotiate this debt. The more likely course of action by the Federal Reserve, however, would be to increase interest rates to investors in order to encourage investments.

On NAFTA (North American Free Trade Agreement), Trump has claimed he would like to renegotiate the trade agreement, and do so with other international trade agreements especially with China. He has a ‘good’ relationship with Russia, though, if you can call it that, and he may take a softer stance on Russia compared to Clinton. Therefore, under a Trump presidency, you should go long on USD/CNY and USD/MXN pairs.

All in all, there will be a lot of uncertainty on the news of Trump’s win, and the strength of the US dollar may falter as the world waits to see what he will actually do.

When can you expect to see any changes

The presidential nominees have spoken a lot about how they are going to change the US economy, but the winner of the election only steps into the White House on the 20th of January 2017. Till then, they will remain the president-elect, and cannot effect any changes regarding the country since they still won’t have the authority. Even after being inaugurated, bills still have to be passed by congress which includes the senate and house of representatives before the president signs them into law.

Market sentiment, on the other hand, doesn’t wait for the inauguration of a new president before responding to their statements while on the campaign trail. Therefore, the expected changes will become immediately visible as soon as the final results are announced. 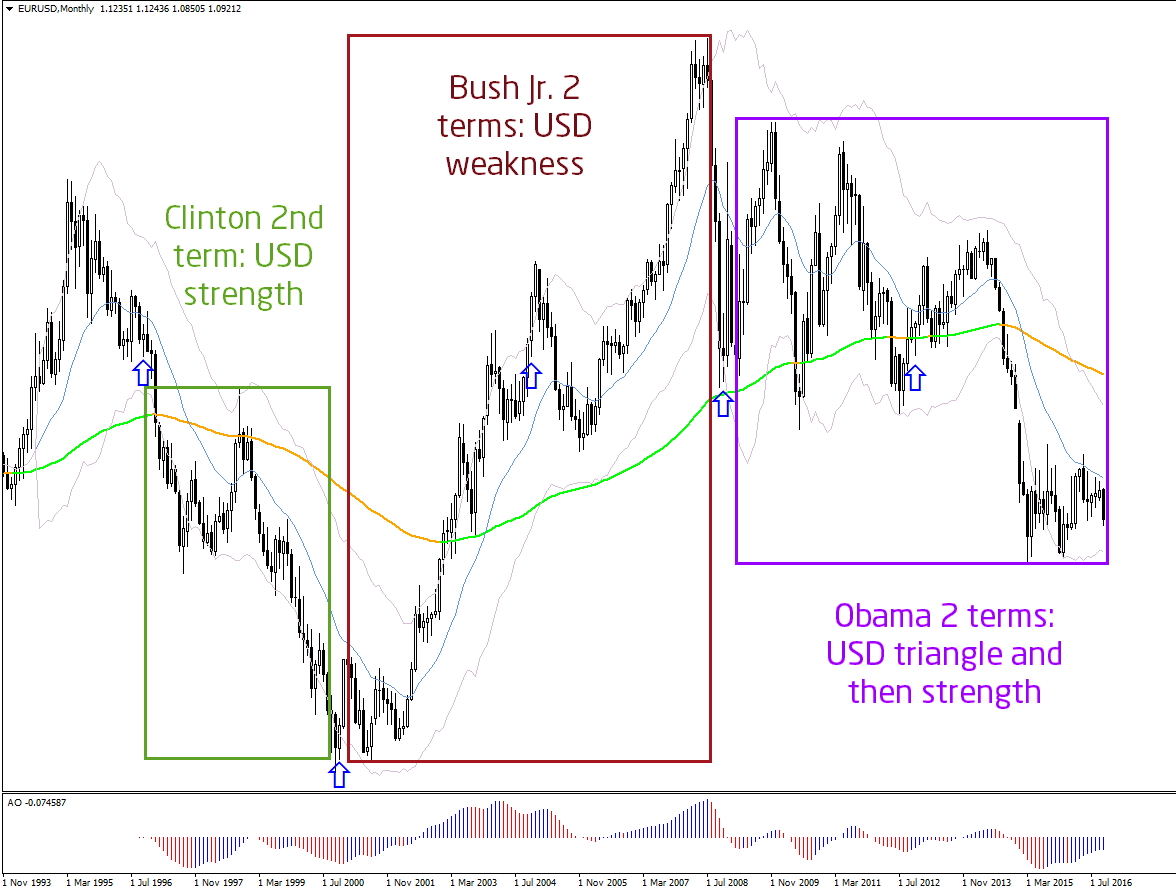 As I’ve mentioned earlier, the elections present a time of great volatility in the markets, so trading at this time is only meant for those with the psyche built for scalping. You should be prepared to spend a lot of hours in front of your computer looking at real-time Forex charts and an eye on the news. If you can’t do that, it’s best that you close any open positions you may have and watch at a distance, and this is what most conservative traders are doing.

For the renegades, you can make lots of pips this week trading on the news from the US elections, but don’t forget the economic calendar Forex, there are still a couple of important news announcements that may also have an impact on the markets.

Watch how the markets reacted to the US election results below: