0.00
EUR/USD
GBP/USD
USD/JPY
USD/CHF
AUD/USD
BRENT
Gold
Bitcoin
Risk Warning: Your capital is at risk. Statistically, only 11-25% of traders gain profit when trading Forex and CFDs. The remaining 74-89% of customers lose their investment. Invest in capital that is willing to expose such risks.
TopBrokers.com > Forex Basics > Comparing fundamental and technical analysis

With forex trading, it is crucial to identify a strategy you will be using to trade, without one, you shall only be losing money. There are 2 basic ways to trade in the Forex market - by closely studying the forex charts online or by responding to important economic news releases. The former strategy is referred to as technical analysis, and the latter, fundamental analysis. 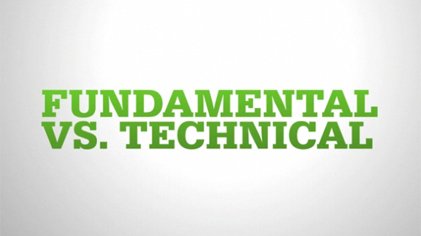 With this strategy, the trader depends on the economic calendar Forex to know if there is any major news announcement coming up that may affect market sentiment. Price movements in the Forex market are hugely affected by these news announcements, and this can be a good opportunity for a Forex trader to place an order. A good example is the Brexit vote that rocked the stock and forex market, causing the Sterling Pound and the Euro to drop by more than 10% within hours.

Every country needs a central bank which acts independently of the political environment of the country. The purpose of the central bank is to make decisions about the country’s finances in order to ensure the economy is functioning properly. The tools a central bank uses include:

Besides controlling the economy, the central banks also release crucial information about the state of the country by providing economic statistics.

Most counties have a central bank, but all countries will have such a system, even though the title may be different.

This is the central bank of the United States, and since the US Dollar is responsible for almost 80% of all the Forex trading operations in any given day, the statements by the FED Chair Janet Yellen on monetary policies have a huge impact on the Forex market.

These are also very important and represent the economic status of the European nations and they too have a huge impact.

Despite every country having a central bank, the most significant to the Forex market include:

Central banks will occasionally release data on the unemployment rates of the county they operate in. Obviously, employment affects the economy because it provides the citizens with money to spend and, consequently, growing the economy. Increased unemployment shows that there is limited economic activity, and generally signifies a weakening economy. Again, these statistics will be most significant when it comes from the major superpowers like the US, UK, Japan and Europe in general.

Some of the employment statistics include:

This is the measure of any country’s economic performance, and has a significant impact on the Forex market.

Housing is crucial in any economy, and was in fact one of the main factors that led to the global recession of 2007. Therefore, reports such as existing home sales and housing starts are crucial in determining how the housing situation of a country is performing.

Once economic news reports are released, traders are usually quick to respond to the news and act on it. However, it is not always advisable to jump right at the moment when the news is announced, but instead to wait a few minutes. Sometimes, the markets begin to move in one direction based only on sentiment, but then the trend reverses when the effect of the news is finally felt.

Fundamental analysis has a lot to do with the psychology of traders, and there will always be differing points of view. Unless you are very sure about what every other trader is thinking, you should wait a few minutes. This might get you onto the trend train a little late, but it’s better to be safe than sorry. Afterwards, make sure you ride with the trend for as long as you can – major news tends to rock the Forex markets for several hours and even days, so don’t close your trade too soon but hold on until the end.

Besides the news, a fundamental analyst needs to be aware of the peak trading periods. The Forex market runs 24/5 only because of the varying time zones, and the most active periods are when the Tokyo Stock Exchange, London Stock Exchange and New York Stock Exchanges are active. There are also lags in between the day when traders are out for lunch, and the markets tend to slow down a little.

This is important to a fundamental analysis trader because his gains are only available when there is movement in the market.

Unlike fundamental analysts who wait for news announcements from other people, technical analysts take matters into their own hands. This kind of analysis is done by a close analysis of price patterns in the past, then predicting how those past movements may affect the future. Behind this strategy is the adage, ‘history repeats itself’, and assuming that things somehow seem to remain the same.

This is among the most favoured form of analysis of the Forex market, and has proven to work quite well. To see just how effective it is, you should be aware that all automated trading systems and trading advisors use technical analysis to predict future price movements, and these systems are very profitable.

However, you don’t need a robot trading for you to make use of technical analysis, various tools and strategies can be made useful:

A period when the forex market is considered to be ranging is that period when the price seems to be moving up and down continuously within a support and resistance level. On the other hand, trending periods occur when one currency within a pair is either becoming stronger or weaker consistently, so the chart has a clear upward or downward trend. Recognizing the state of the Forex market is the first step to technical analysis.

Forex trading platforms will offer various indicators and tools that can help you predict the direction of the market. There are so many of these tools that it is not possible to mention them all at once, but some of the most popular and effective ones offered by the top Forex brokers are:

There are lots of indicators and tools, and they can be very helpful to the technical analyst. The trick is to try these tools with a demo account first before applying them to live trading. Remember to use more than one indicator, and use them to confirm your analysis – at least 2 indicators will do. After testing various indicators, determine which ones you want to include in your strategy and then you will be a much better technical analyst.

Forex charts always look strange to someone who’s looking at them for the first time because they are unlike any chart you used in school. You can convert the forex chart to use a line chart which looks more natural, but you shall lose crucial information that can only be delivered with the candlesticks. By learning these candlestick patterns, you can be able to tell when trends are about to change so that you can place your trades in time.

It is very important to determine the time period you are most comfortable with. Shorter time periods like 1 hour, 30 minutes or less are great for scalpers because of the changes that can happen within shorter timeframes. However, trend movements are also unpredictable and can make the technical analysis less effective. For a technical analyst, it’s advisable to choose a higher timeframe which is more consistent and movement can be easily predicted.

Which system is better?

To be honest, there isn’t a straightforward answer to this question. The debate between technical and fundamental analysts is never going to end because each type of trader will have their own opinion. The truth is, it has got a lot to do with the trader’s personality rather than the effectiveness of the system.

Technical analysis traders are more critical and can internalize and interpret the little intricacies within the forex charts, and to determine any patterns. This process can take a lot of time, probably hours before placing a trade based on the predictions. On the other hand, fundamental analysts are more attuned to predicting traders’ sentiment. They understand how traders react to economic news, and can place their trades based on this innate understanding.

In favour of technical analysis

Automated trading systems are becoming ever more popular because they have been shown to be extremely profitable. This is a sign of how effective technical analysis is, except that an automated system is able to analyse many facets of a forex chart than is humanly possible. Besides, technical analysis is effective because governments will always take measures to prevent their currencies from depreciating too much, so the support and resistance levels are very powerful and will hardly be broken.

However, pure technical analysis can fall apart in the face of critical economic news. Most investment banks and hedge funds which use automated trading had to turn off their automated systems during the Brexit vote because of this reason. Therefore, you cannot use technical analysis alone, despite its proven effectiveness.

In favour of fundamental analysis

An experienced trader is able to determine the direction of the markets from released economic news, and it doesn’t take as much work as technical analysis requires. This kind of trading strategy depends largely on the sentiment of traders who may react in different ways, but the predictions can be made quite accurately.

The only downside to this system is that there aren’t always major economic news releases, so depending on this strategy alone can leave you out of the game for days. Therefore, you need to keep some technical analysis in mind when there isn’t any significant economic news.

This means that there isn’t a single trading system that is better than the other. They both have their merits and disadvantages, but a good trader needs to be flexible to apply knowledge from either system while creating their own trading strategy. Remember why you got into Forex trading in the first place, and set aside your ego or support for one system or the other.

What’s more, most Forex Trading platforms will have a news section where breaking news is sent periodically, even on the phone, so there is no reason to stick to one system only.

Check out this video by an experienced trader comparing their favourite system: