0.00
EUR/USD
GBP/USD
USD/JPY
USD/CHF
AUD/USD
BRENT
Gold
Bitcoin
Risk Warning: Your capital is at risk. Statistically, only 11-25% of traders gain profit when trading Forex and CFDs. The remaining 74-89% of customers lose their investment. Invest in capital that is willing to expose such risks.

When Amazon was founded by Jeff Bezos in 1994, it was mainly an online marketplace. But Bezos had accurately predicted a future where everything would be on the cloud and launched Amazon Web Services (AWS) in 2006. Today, AWS is responsible for 73% of Amazon’s revenue and made Jeff Bezos the richest man in the world. What Bezos predicted about the internet has come true, and now iExec is counting on the same for blockchain technology. 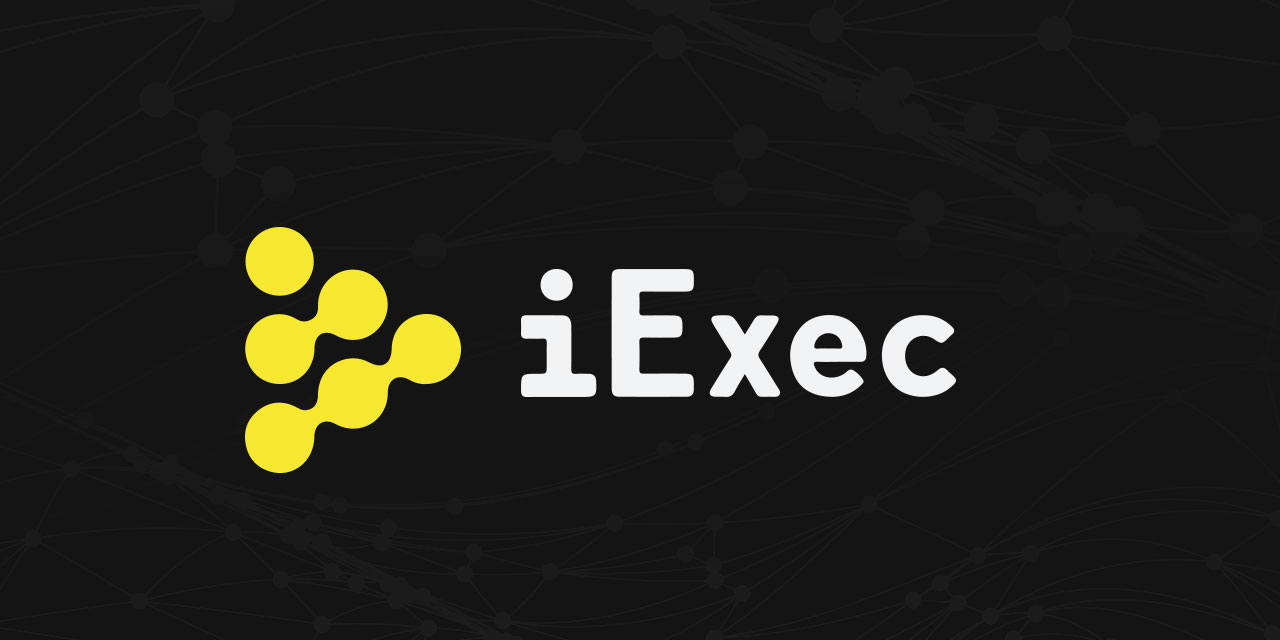 What is iExec RLC?

The company behind iExec is based in Lyon, France where it was founded by Gilles Fedak and Haiwu He. Gilles serves as the company’s CEO while Haiwu is the Head of the Asian-Pacific region. Both of them have PhD from reputable universities in France, so you can assume that they are very qualified. Indeed, the rest of the team is also extremely qualified with several PhDs who have vast experience with cloud computing for over a decade. Their idea was to create a platform similar to cloud computing today, except that it would be used by app developers on the Ethereum blockchain. (WhatsApp, Telegram, Facebook: Who is Going To Be The Next Global Payments Leader?)

To understand the idea behind iExec, you first need to understand the concept of cloud computing as it is today. Imagine if you were an entrepreneur running a resource-intensive program. The obvious solution would be to purchase better equipment to handle the needs of your program. However, big companies like Amazon, Google and Microsoft have a lot more processing power than they need, with those servers consuming power while remaining idle. Rather than waste these resources, these companies can choose to rent out this massive processing power, and that is exactly what they do today. In fact, other companies like Netflix and Apple also rent processing power when they need it. 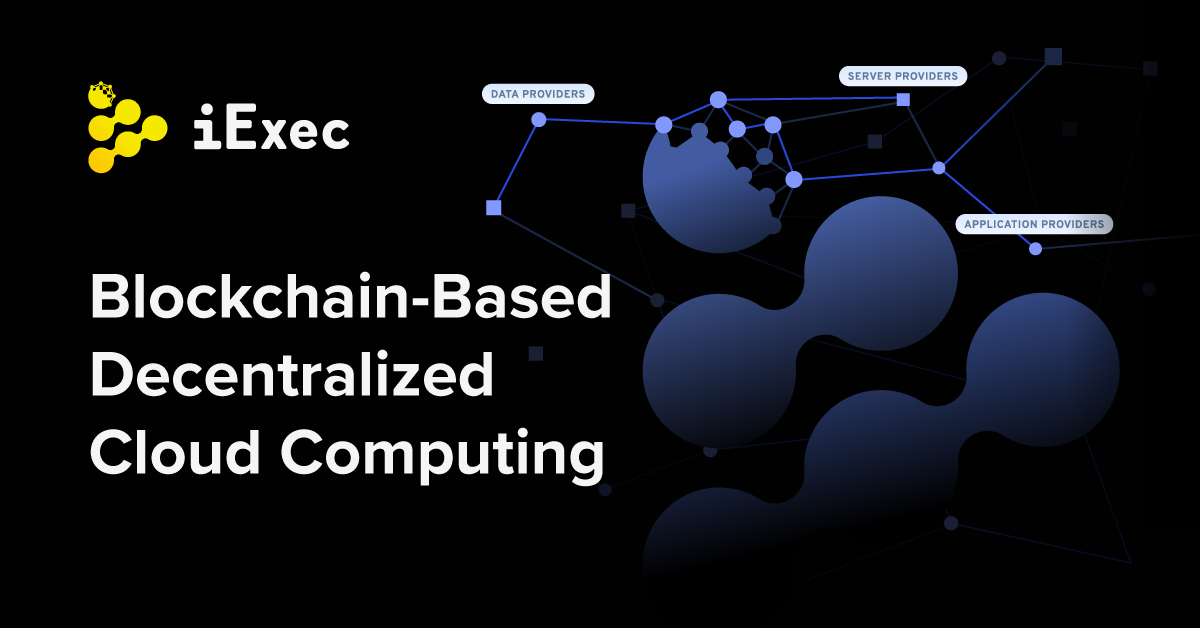 In the case of blockchain technology, there is a similar problem that decentralized app (dApp) developers face. Networks such as Ethereum are capable of hosting smart contracts that can be used to create dApps. Using Ethereum’s virtual machine, these apps can be run on top of the blockchain in a decentralized manner. Being decentralized means that the apps have all the advantages that come with blockchain technology such as security and privacy. (Central Bank Regulation: What is happening with the Forex Industry in Russia in 2020?)

The problem is that the Ethereum network can become bogged down when certain resource-intensive apps are being run. A good example was the spiked interest in CryptoKitties in December 2017 that caused a sixfold increase in pending transactions on the Ethereum network. Apparently, the game accounted for about 10% of all Ethereum transactions. The incident was a cruel reminder that Ethereum is still not as scalable as it needs to be if it wants to handle more dApps. (As it continues to spread, discover: How Coronavirus Will Blow Crypto Markets in 2020)

With iExec, though, some of these resource-intensive dApps would be handled outside the blockchain so as to avoid issues such as latency and network lags that could even lead to a crash. This is done using Desktop Grid Software called XtremWeb-HEP. This is an open-sourced software that does essentially what you would do with the help of Amazon Web Services - outsource. But unlike AWS where processing power is borrowed from a company, XtremWeb-HEP uses individuals. After all, we’re talking about decentralized networks here, right? 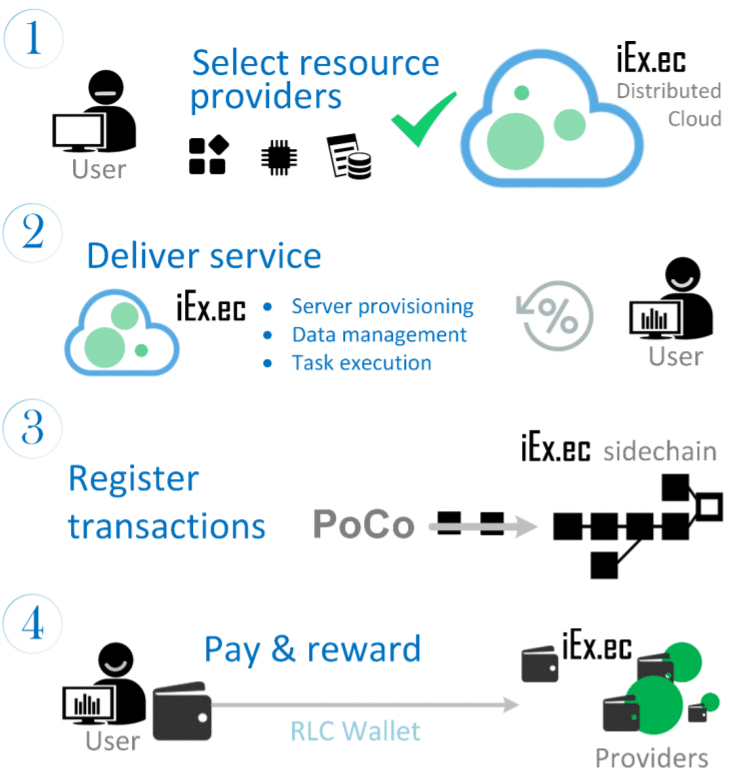 Desktop Grid Software is also known as Volunteer Computing because individuals can donate computing power from their own devices when they do not need it. The power can be as little as a PC or as large as a warehouse full of CPUs. XtremWeb-HEP then pools all this processing power to essentially create a virtual supercomputer. This system is well-suited to blockchain because it has many of the benefits such as security, fault-tolerance, data management, accountability, etc. (Calm Before the Storm: What to Expect from Crypto Industry in 2020-2021)

With iExec’s system in place, any developer running dApps on Ethereum could rent processing power from the company to run any task without affecting the rest of the Ethereum network. To make sure the provider of processing power can handle a task, a matchmaking program is used to analyze the capabilities of the power donor until the right match is found. Once an individual is identified as capable of handling the task, it is assigned to them and they are rewarded using RLC token, the platform’s native token. (Get ready to trade using our: ICON Price Predictions and Forecast for 2020)

Components of the iExec network

The iExec platform has 3 main components that make up the network - Marketplace, dApp store and Data Marketplace. Marketplace is the main area where developers and providers can interact. Providers willing to donate processing power indicate what they can offer while the developers advertise what they need. Providers are ranked using a reputation smart contract to indicate their reputation, just like you would leave a rating for a restaurant. In Marketplace, the role of iExec is to ensure that matchmaking is done properly so that developers always get what they need without disappointment.

Meanwhile, dApp store is exactly what it sounds like, just like the app store on your mobile phone. Developers who simply want to sell their apps can list them here, where anyone interested can easily buy the app. All apps listed on the dApp store have to be running on iExec so that they are ready to go. Finally, Data Marketplace is a section of the network where providers can sell any data that they may have. For instance, crypto traders can share trading tips with one another and get paid for it. (If you’re a crypto trader, you should be aware of these: Top 5 Important Events In The Crypto World In 2020)

All the above features are made possible using the RLC token native to the iExec network. RLC was first issued by the company in April 2017 where the french company raised its target of $12 million within 3 hours. Keeping in mind that this was before the more popular ICOs like Bancor and TON, the ICO was recorded as the fifth-largest up to that time. Despite the seemingly low level of funding, the RLC ICO was a huge success and helped to launch the platform into what it is today. Besides, the total funding was about 10,000 Bitcoins at a time when they were very cheap. You can bet that by now the value of the company has grown significantly. 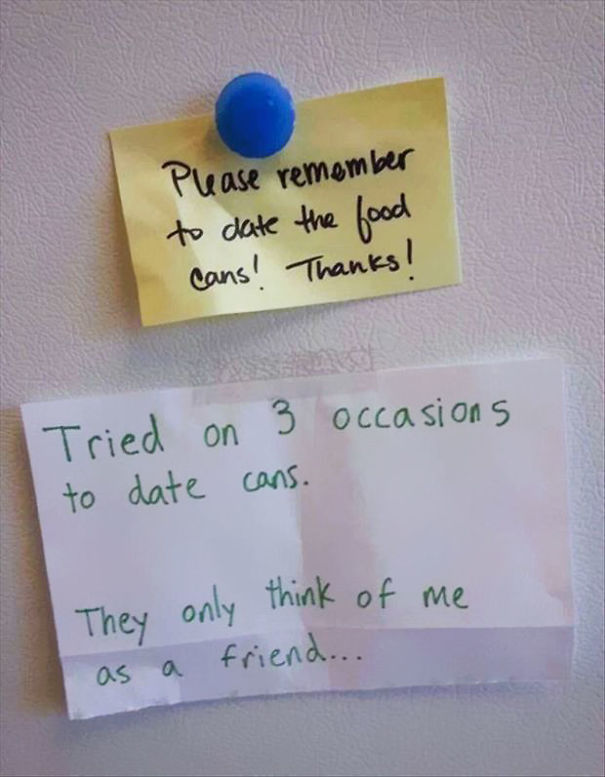 According to CoinMarketCap, the token is now ranked 99th based on market capitalization. Unfortunately, it has never made it very far above the 100-mark, indeed staying below this line for most of its existence. Nevertheless, that doesn’t mean it’s a bad investment as you’re going to see below. (The world is awaiting as: Bitcoin Cash Halves The Mining Reward 2020)

During the ICO in 2017, about 87 million RLC tokens were issued for the $12 million funding. It means that each token was going for about $0.14. The token debuted on open markets at about $0.30 apiece before hopping on the crypto train that was in full force that year. At its peak in January 2018, the token was worth about $4.80 but it quickly turned around and followed the crypto ship back down below the ground. Today, the token is worth $0.53, which is still higher than the ICO price, but certainly much less than the all-time high. 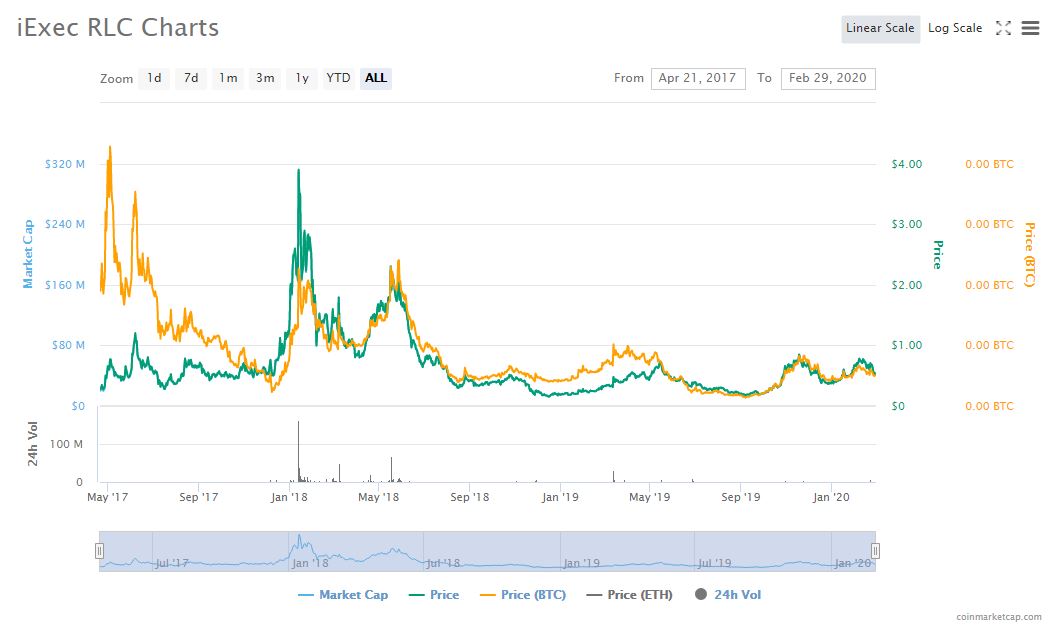 Price predictions and forecast for 2020

To determine the future price of a coin, one must look at its possible practical uses in the real world first. iExec has managed to secure meaningful partnerships with several tech companies such as Intel, Microsoft and IBM and has even joined the Confidential Computing Consortium (CCC). Companies in this group recognize the danger in centralized cloud computing regarding security and data privacy, an area where iExec can help in decentralizing cloud computing services. iExec is also backed by Bpifrance, an investment bank in France, and also collaborated with the EDF electricity supplier. (Bitcoin SV Genesis Hard Fork 2020: What's New?)

In addition, the company has partnered with Ubisoft that is known for its games. There has been speculation that game consoles may be eventually replaced by cloud gaming as gamers start to use mobile devices. Such a move would set up iExec’s for a big win and this partnership with Ubisoft proves just that. All this is to show that iExec has institutional support from renowned companies, proving that there is a potential application of the technology into real-world industries. 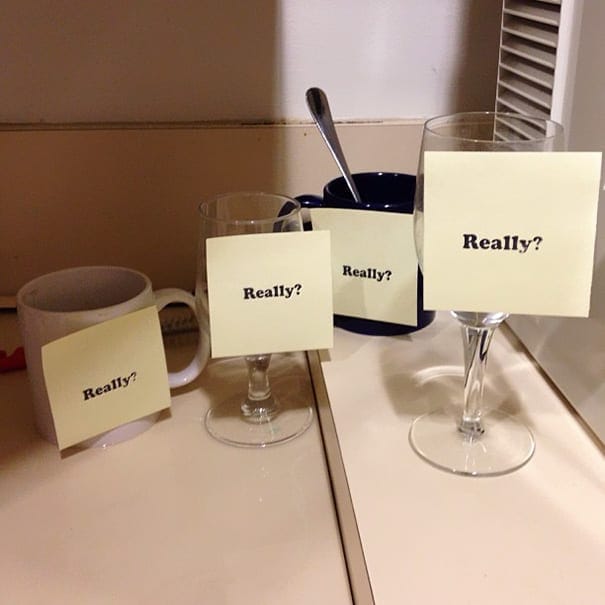 Another thing that iExec has going for it is the lack of stiff competition. A few other projects like Filecoin and Siacoin are working on similar ideas, but overall there isn’t any direct competition as these companies primarily deal with cloud storage and not cloud computing. Competition is ruthless in crypto because investors quickly dump your coins at the first sign of trouble. Without competition, this is unlikely to happen, and perhaps this is why so many Fortune 500 companies are interested. (Everyone should be aware of the: 2020 Bitcoin Halving Warning Update)

Although the current market cap is quite low, crypto experts are still optimistic and so are we. In fact, the current pricing could mean that the coin is undervalued and poised for a huge leap in value. The most optimistic experts believe RLC will be worth more than $2 in 2020, but that would be too optimistic. A more decent prediction would be around the $1 mark by the end of 2020. So far, the rising price has been stable and the coin arena is gearing up for massive growth in 2019 thanks to Bitcoin halving its mining rewards. The two are positively correlated, so the value of RLC would also increase. (Learn about the: New Rules and Crypto Regulations in Germany As Of 2020)

That being said, iExec is more focused on the future since all its ideas are still only ideas and no company will invest significantly in this project just yet. As the crypto market continues to grow and stabilize, perhaps then companies will start to adopt iExec. This might take a while, though, so don’t go buying RLC for the anticipation of a big win within a year. (Ethereum 2.0 Launch 2020: What’s new?)

For a brief overview of what we have already discussed, here is a short video:

Real account Demo account
﻿
Risk Warning: Your capital is at risk. Statistically, only 11-25% of traders gain profit when trading Forex and CFDs. The remaining 74-89% of customers lose their investment. Invest in capital that is willing to expose such risks.