EUR/USD
GBP/USD
USD/JPY
USD/CHF
AUD/USD
BRENT
Gold
Bitcoin
Risk Warning: Your capital is at risk. Statistically, only 11-25% of traders gain profit when trading Forex and CFDs. The remaining 74-89% of customers lose their investment. Invest in capital that is willing to expose such risks.

Despite the total market cap of the entire crypto market decreasing to levels last seen in August 2017, the number of coins is still rising. One of the newcomers in the industry is aelf, which is branded as a decentralized cloud computing blockchain network. Here at TopBrokers, we don’t get hung up on big words because we have seen many of these self-acclaimed revolutionary coins bite the dust and disappear. Therefore, we’re going to unpack this mash up of ‘techy’ words so that you the investor knows exactly what you’re getting into and whether it’s worth the risk.

What exactly is aelf and what does it do?

aelf was created by Ma Haobo and launched on the 21st of December 2017. Unlike many other coins, this one was not funded through an ICO but rather by private investors such as Huobi Capital, Bitmain, Signum Capital and many others as you can see from the image below. Through the private funding, aelf raised $40 million in December 2017 before going live. It was launched to solve the many problems ailing coins such as slow transaction speeds and scalability. It seemed to be a promising venture and quickly gained wide commercial interest, which explained its quick rise in value from the moment it was launched. The native token for the blockchain network is denoted as ELF as a nod to World of Warcraft elves. ELF is required when using the network as a fee for smart contracts, transaction fees and data transfer fees. (Do you know: What is An ICO and How Can I Make Money On It?)

Also from the company’s website, they are not short of quality developers and advisors. Ma Haobo himself is also the CEO of Hoopox, which is a blockchain company that provides infrastructure to blockchain systems. Hoopox was founded in June 2016 and received initial funding of $4.3 million in September 2017, raising its valuation to $20 million. Among the most notable advisors are Michael Arrington who is the founder of TechCrunch and Zhou Shuoji who is a founding partner of FBG Capital. (Gram (TON) Vs BTC in 2019: Best Worldwide Crypto Fight, Pros and Cons)

aelf is different from other coins because it is not going to be the primary network but rather as a host for many others. A simple way to think of it is like an operating system similar to, say, Windows. In fact, it has been referred to as the Linux of blockchains. In case you didn’t know, Linux has been used as the basis of creating many other operating systems like Android and iOS. To do this, the aelf network will be the main blockchain out of which smart contracts will be used to create sidechains. On these sidechains, developers can create decentralized apps (dApps) that run independently from the main blockchain with the ability to customize at will. (Find out more on the: Launch of The Binance Decentralized Exchange Future (DEX))

To tackle the scalability problem, mining nodes will also be scalable such that there isn’t any congestion on the network. This has been the main problem with popular coins like ETH and BTC because mining has to be done from a single node. The mining process is also different because it makes use of a Proof-of-Stake (PoS) system rather than Proof-of-Work (PoW). Unlike PoW where miners have to hash the blocks using brute processing power, PoS is a consensus system that uses less power to maintain the system. Besides reducing energy consumption, it eliminates monopolization by miners because all token holders can vote on system upgrades and modifications. (Do you know: What Is The Future Of Coin In Finance?)

What is the future of aelf and should you invest?

When the coin was first launched in 2017, it got caught up in the crypto frenzy and its value quickly shot up to $2.26 by the 25th of January 2018 – double its initial price of about $1.1. Over the next 3 months, its value suffered in a similar fashion to other coins, but there was some reprieve in the start of May when the company partnered with Fair.Game. Its market cap also spiked up from about $250 million to an all-time-high above $500 million before dropping gradually to the current market cap of $37 million and a price of $0.13 according to CoinMarketCap. (Investing In Coins: Watch These 5 Profitable Coins) 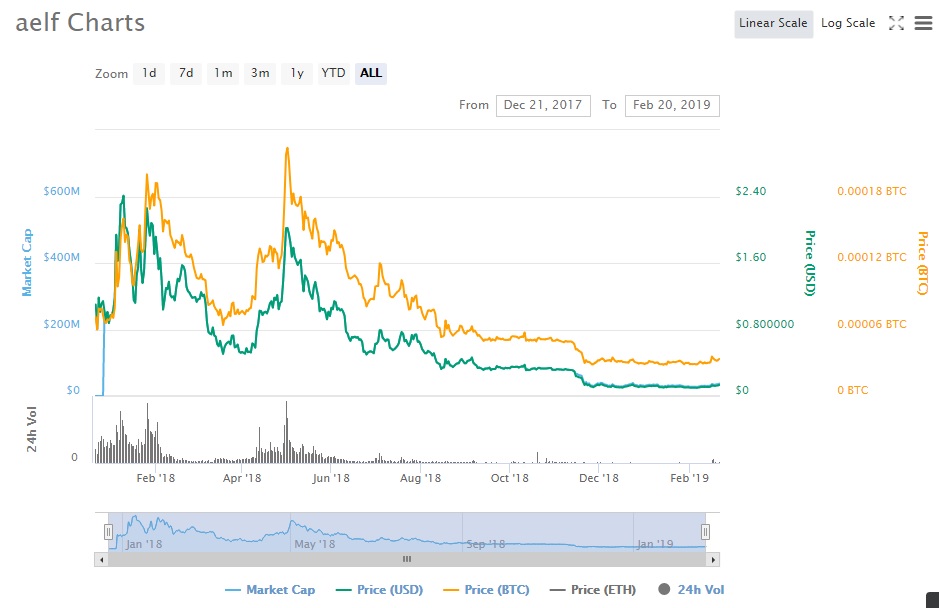 The current state and value of the coin may be very worrying considering it is now valued below its value at launch, but it needs to be understood. The entire crypto market has been taking a beating dragging down even popular coins like BTC. Nevertheless, this doesn’t mean the market is dead, far from it, because it is actually the time for the truly great coins to stand out. Does aelf fit this bill? Let’s find out. (Here are: The Most Prominent Coin Hacks and Scams You Should Know)

Does it actually work?

The first thing that can set apart one coin from the rest is if it actually fulfills what it had promised at the time of its launch. True to their word, aelf is actually functioning at creating sidechains and hosting dApps. Many other coins have failed to do this and ended up in the dirt or disappeared completely. Take the example of Bancor that raised $153 million through a public ICO and is now placed below aelf and transacting about $2,000 per day from about 125 daily users. As you can see, it’s not about the start but rather more about the finish that matters. (Remember these: 5 tips to identify the perfect ICO to invest in)

As we already mentioned, the company has already partnered with Fair.Game that hosts over 30 online games. Furthermore, aelf is part of Innovation Alliance that includes companies like Qualcomm, AbbVieDolby Laboratories and several other corporations. If they can agree to use the aelf blockchain, then that would be a major step forward for the coin. As you can see, aelf is not only applicable, but it has already gained the trust and corporation of major industries. This could only mean that it is a venture worthwhile investing in. (This is the: Stellar Lumens (XLM) Price Predictions and Forecast for 2019)

Many coins also struggle to become accepted and listed by crypto exchanges. This has not been a problem for aelf, which is already available in numerous popular exchanges like Bittrex, Bitfinex, Bithumb, Binance, Huobi, etc. These exchanges are very selective about the coins they list because they have to stake their own reputation behind them. Seeing how many exchanges offer ELF trading shows that many technology leaders believe the technology is sound and promising. (After The BTC Cash Fork, Which Is The Real BTC?)

Also don’t forget that most of the team members and developers behind aelf as well as the advisors are also very famous in the field. These people too would not want their names tarnished by a substandard company or technology, so it’s safe to assume that aelf has received validation from the industry’s leaders. (Do you wonder: Will Institutional Investors and Sharks Invest Massively in BTC in 2019?)

At this point, it can be dangerous to claim that coin prices are stable because of the high volatility. We have seen this happen in the past when the value of even a major coin like BTC dropped by double-digits within hours. Nevertheless, aelf has still held on steady throughout the turmoil, sometimes even rising above the tides to beat the currents. There is simply no reason to believe that its value won’t start going back up as soon as crypto markets pick back up and begin to gain more investors. We already know that institutional investors are about to come on board, and when that happens, ELF value will shoot back up. (This is: The Strategy Of Coin Whales In 2019)

Although things may not look too rosy right now in the crypto markets, it’s not yet time to throw in the towel. A lot of experts believe that crypto markets may have reached rock bottom and that they cannot go any lower. In this case, aelf is definitely one of the undervalued coins waiting to receive the recognition it deserves. Furthermore, aelf has positioned itself more for the future than many other coins because it doesn’t suffer any of the setbacks previously observed. (Know about: The Future Of ETH In 2019 And What To Expect)

Therefore, at the moment aelf is a safe investment because it has wide adoption, acceptability and a team of trusted developers and advisors. Over the long term, aelf will only go in one direction - up. For any investor looking for a stable investment to hold for several years, then this is definitely it.

To know more about this coin, just watch this quick video from the company:

Real account Demo account
﻿
Risk Warning: Your capital is at risk. Statistically, only 11-25% of traders gain profit when trading Forex and CFDs. The remaining 74-89% of customers lose their investment. Invest in capital that is willing to expose such risks.
If you like this discussion on TopBrokers.com then please like us on Facebook